What do you do when you have a beautiful subject with amazing makeup in front of your camera and you want to produce a shot that is truly special and… it’s just not coming together? Maybe the lighting is boring, the camera angles are bland, and the sweat is starting to bead up on your forehead. Trust me, I’ve been there too… and here’s what I did.

This is a fashion portrait tutorial that I shot to illustrate multiple techniques for some upcoming lectures and workshops. The real credit for this shot goes to my makeup artist. Not only did she create an awesome makeup look, but she did it on herself and modeled it as well. Believe me, doing makeup like this on your own face is ten times harder than doing it on somebody else. It’s the makeup artist equivalent of a self-portrait – only a photographer’s self portrait is a lot easier to do.

My original concept for what became this fashion portrait tutorial was to do something very low key, so the shot would be all about the makeup. I had one 320 watt second strobe mounted in a 16” x 52.5″ strip softbox set on camera left.

I draped a black fur collar from a winter coat around Monae’s shoulders so that I would have a little texture in the bottom of the frame and not have a floating head. Now I know some of you will immediately tell me, “You need separation from the background!” You know what? That’s a bunch of crap. Let’s be clear that there is no rule that says you have to have separation. Sometimes it makes a huge difference and looks great. Other times… not so much. In both cases it’s a matter of preference.

In this case, I am fine with the lack of separation, but I’m just not excited by the shot. While I love simple, this was just too simple.

What to do when things don’t go well

I go to something safe – something I’ve done before – something that I know will usually please people. Notice I didn’t say please me – I simply mean people will look at it and like it. Going back to this safe place lets me clear my head and begin to make some positive progress and start looking for a better idea.

So my next step was to add some colored gels. I added two different colored magenta gels to a set of 320 watt second strobes placed about 5 ft. behind Monae and on either side of her to create the pink rim lighting – but I still wasn’t very excited with the result.

Next, I moved the softbox to a horizontal position above the camera and slightly to camera left and decided I would get a little crazy by adding some LumoPro LP180R speedlights with gels behind Monae and aimed directly into the camera lens. I also decided to ditch the fur collar and added some black tulle with sparkles around her neck, just to put a bit more texture into the shot.

Here are the original files as I added a speedlight, adjusted exposure, and then stopped my lens down to f/9 so that I would start to get the rays of light from the strobes:

I tried some various angles and power settings and was getting some interesting results, but I still wasn’t getting the WOW response in my gut that I was looking for.

Now I was getting a little desperate. My model / makeup artist had done an incredible job with her makeup and I didn’t want to disappoint on my end.

So I began experimenting with placing the black tulle material in front of Monae between her and the camera. This was getting some interesting results but I wasn’t ultimately thrilled with having the texture of the material over her face.

Next I remembered a shot that I had done years ago where I placed a beauty dish high above my camera and placed the camera high above the model and had her strain her neck looking up to the camera. I decided to try a similar concept still using the strip softbox but placing it high and in front of Monae with my camera just below the softbox. Then I added another 320 watt second strobe on the floor behind Monae with a teal gel to create the glow that you see below:

And this is where the magic started to happen. I am using the Interfit Honey Badgers with their LED modeling lights that have a proportional output, and I was really loving the soft feeling that I was getting while looking through the wide open lens, so I decided to turn off my flash trigger and I began shooting with the light from the daylight balanced LED modeling lamps.

At this point I knew I had my lighting and I loved the shallow depth of field I was getting – something you rarely hear me say in a studio – but more about that in a few minutes.

After all of that experimenting my final shot wound up being lit by the 60 watt LED modeling lamp from a Honey Badger placed in a Medium Half Dome softbox from Photoflex.

Monae is seated on a posing stool about 8 ft. in front of a black Savage Seamless Paper Background and behind her I have two more Honey Badgers mounted one on either side and above – both with magenta gels in place to create the rim lighting.

I have one more Honey Badger mounted on a Baby Pin floor stand with a 7 in. reflector and a teal gel that is set about 3 ft. in front of the background and aimed up so that the hot spot is directly behind her head.

For my last few frames I held a white Walmart reflector just under Monae’s face and just out of camera range for a little more fill in her eyes.

I am shooting from a Benro carbon fiber tripod with an Acratech Ballhead mounted on top.

This makeup design is very symmetrical and also VERY difficult for a makeup artist to get perfect – especially when they are doing it on themselves. So from the beginning I had intended to do a slight turn of her face to help mask any inconsistencies. In my previous article there was also very symmetrical makeup – but it was a makeup artist putting makeup on a model, so there was less to hide and I was able to photograph her straight on.

I knew that I would be shooting very close-up and wanted this shot to be ALL about the makeup, so I didn’t really pose her at all. I just asked her to sit relaxed and I worked with the angles of her face.

The important thing that I had to watch for with the slight head turn is her ear. If I only turn the head a little, I now have a piece of her ear growing out of her head – right in the same plane as her eyes.

This is totally natural, but it is still a distraction. I can get the same shot by being careful to turn her head up to the point where I would see the ear but still hiding the ear – this way there is no distraction and more attention remains with the eyes.

I was shooting tethered with the Tether Tools TetherBLOCK and TetherPro extension cables and using the Olympus Capture software to manage the camera and downloads.

The final image required a bit more post production than usual. The basics of course – color, contrast, sharpening and removing of blemishes – but since Monae actually did this makeup on herself it was my job to help clean up the details a little bit.

It is a situation where if you look at the original shot – at first pass it looks WOW – but then the longer you look at it, the more you start to see the few imperfections. So you take the time and clean that up in post.

You could do this shot with strobes or speedlights and fake the shallow depth of field in post production. In fact, I would actually encourage you to do that instead of shooting wide open in the studio, unless you are very diligent about knowing how much depth of field you have to work with and keeping both eyes in focus.

So what is the best course of action when things aren’t going the way you want them to? Keep going. Be honest with yourself. If you need a little break to get your head clear – take one. You can do what I did and go back to something you have done before, just to clear your head. But whatever you do, you have to keep going.

There are two big mistakes that I see photographers make when things aren’t going well. The first is giving up and settling for a shot that they know simply sucks. Why would you give up? What do you learn from that?

The second mistake that I see happen is the photographer puts the camera down and stands back and surveys the scene. The problem with that is your brain is having to process everything that is in front of you, not just the part that you are trying to photograph. Plus, while you are standing there staring, your model is realizing that you have no idea what to do.

The best course of action is to put the camera back up to your eye and keep taking pictures. This way, you are looking at a picture. We already established it is a bad picture, but it will be much easier for you to evaluate what exactly is wrong and needs to be changed. Plus you are keeping your model happy because he or she is hearing click, click, click – and I promise you your model would much rather hear click, click, click than “Oh baby that’s hot.”

But the bottom line is you have to keep shooting. Work the shot – try things – even things that seem ridiculous. Your model will always respect your effort, you will learn lots of new things, and your photography will head in directions that you hadn’t previously imagined.

Generally speaking, there’s no reason to shoot wide open in a studio when you are creating a portrait or fashion portrait like this one. If you are familiar with my work, you know that I usually shoot between f/5.6 to f/8 for my studio work. If I want the feeling of some shallow depth of field by having my subject’s ears or shoulders slightly soft, I will create that in Photoshop.

I shoot at 5.6 or 8 so that I don’t have to be concerned with depth of field and so that I can tell my subject to turn their head and not have to worry on each frame if I have both eyes in sharp focus.

It’s not a rule – it’s my practice, just like having separation from the background isn’t a rule. But, if you are going to shoot wide open, pay close attention to what is in and out of focus. In the case of this shot, shooting wide open wouldn’t have made much sense if I didn’t have the material draped over her heard. The shallow depth of field combined with the sparkles in the material created the dreamy bokeh. 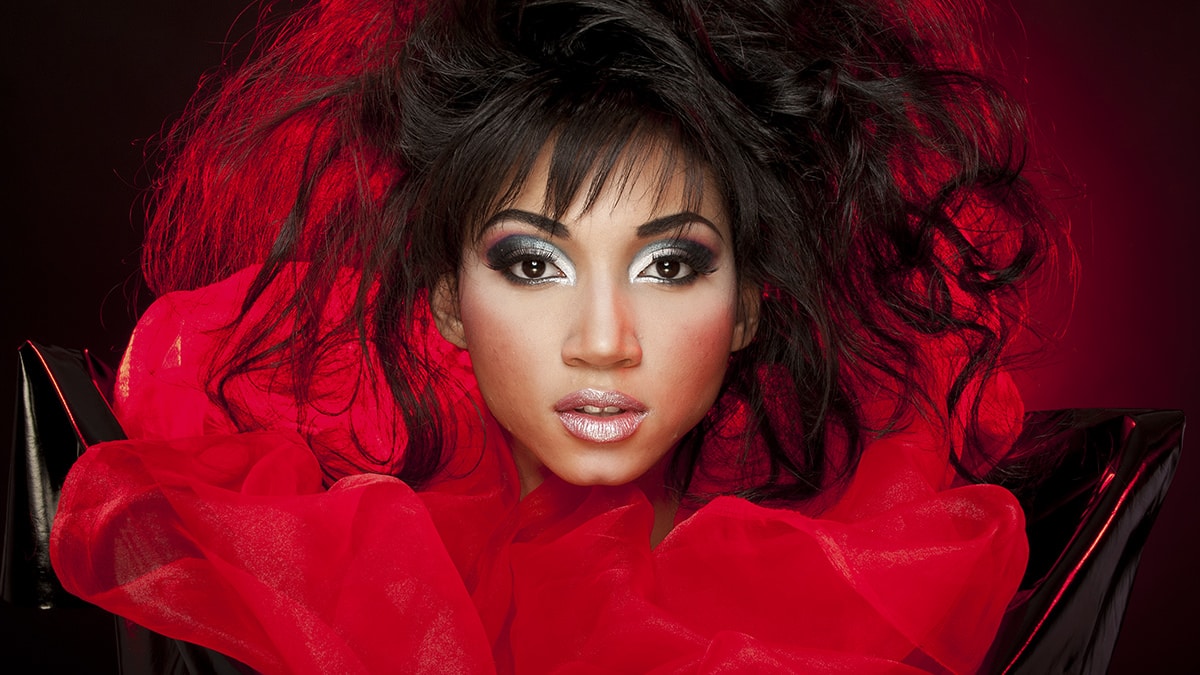 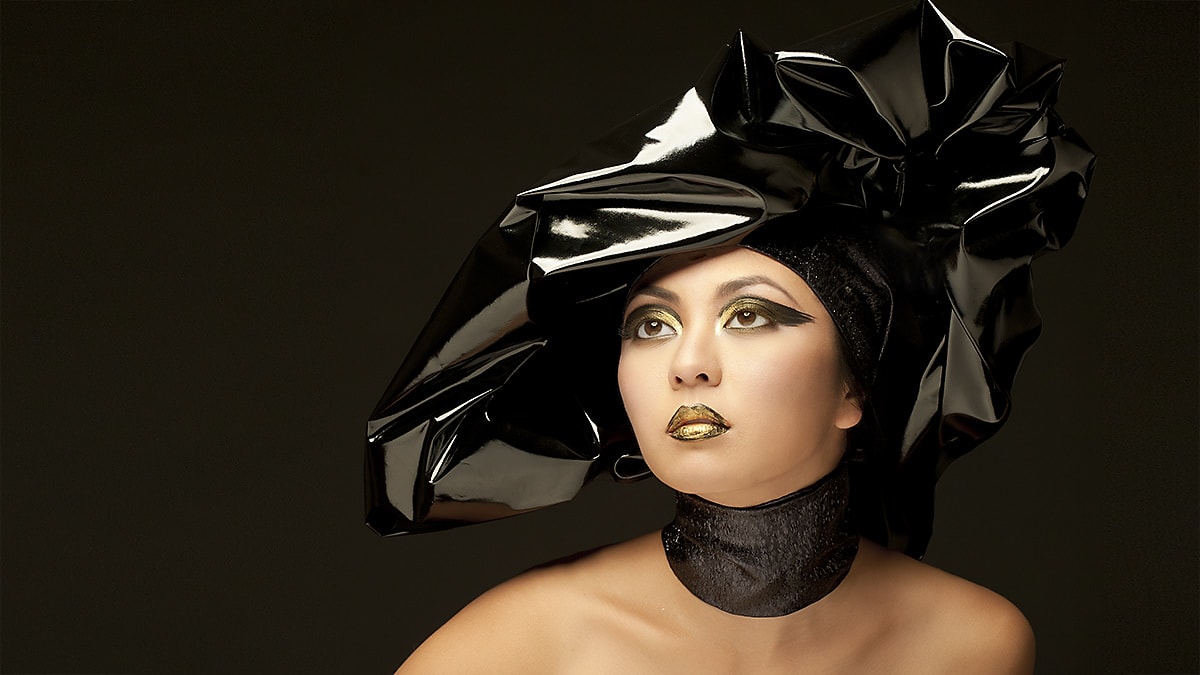 One Light & Reflector for Dramatic Portraits 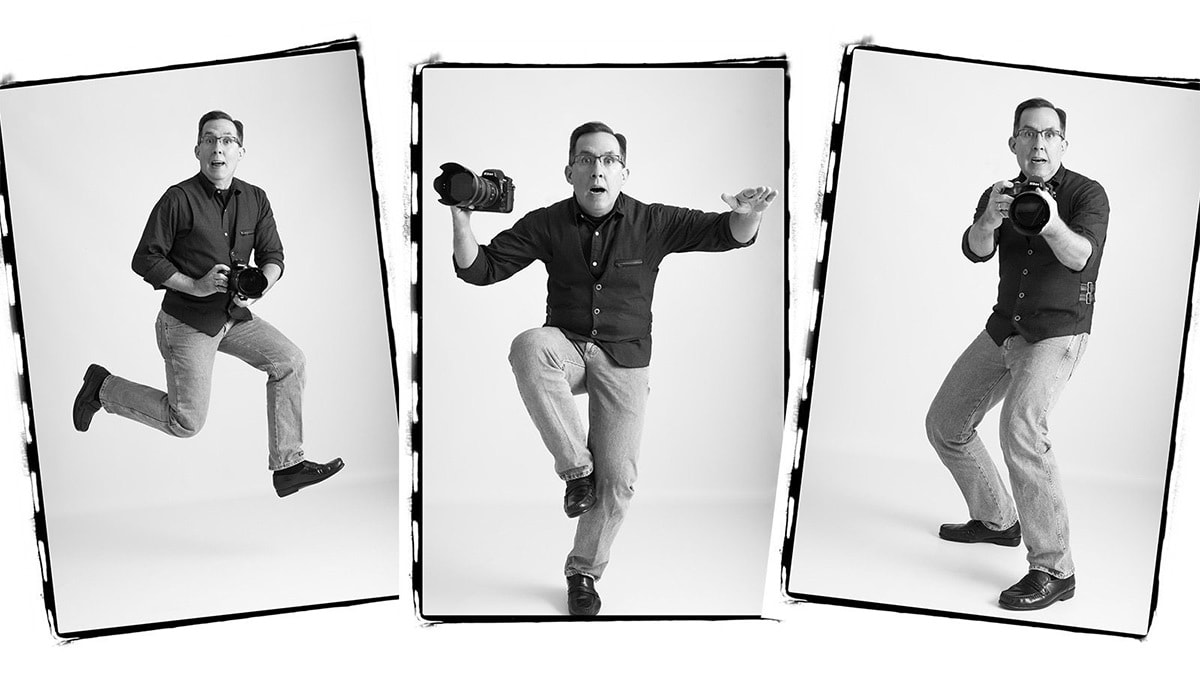