I bet you’re wondering ‘What the heck is a Light Blaster?’ The Light Blaster is a strobe-based image projector that will let you to turn a simple backdrop into an exciting new background with color, patterns, textures, or even real world imagery. Most light modifiers only allow you one color or one shape of light. The Light Blaster lets you project an image onto a background, or your subject, which opens up an infinite number of possibilities.

Light Blaster lets you use gobos, just like the old school Fresnel lights that they use in Hollywood. In other words, you’re really only limited by your own imagination. Later on I’ll show you how to use a Light Blaster to create your own backgrounds and gobos that you can use in a studio or on location with speed lights and mono lights. I’ll even show you some results from my very first time using the Light Blaster.

Below is a Light Blaster. The part in my hand is the slide holder. 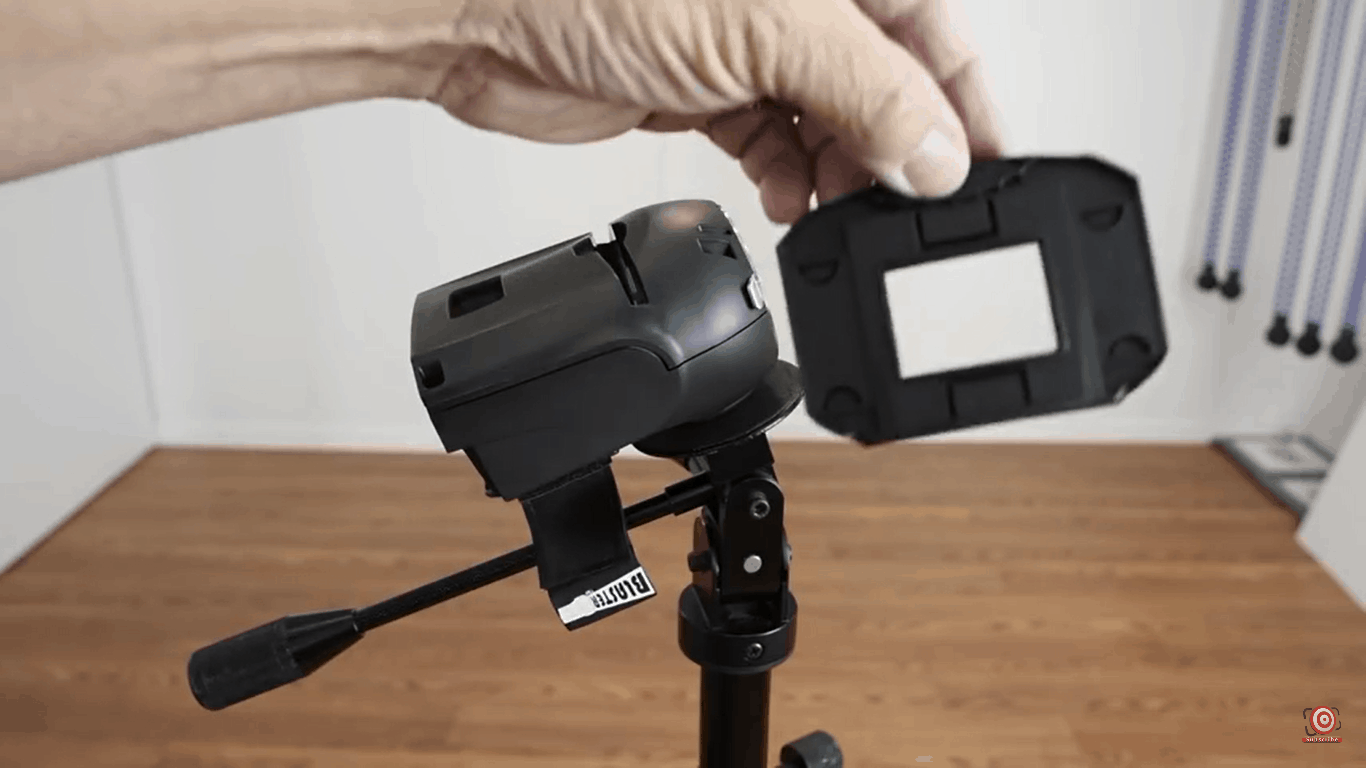 The holder will allow you to use any one of the pre-made slides that are available in sets from Light Blaster, or you can use 35 millimeter slides. Heck, if you’re an old guy like me, you probably have tons of them stored away.

The Light Blaster has a Canon EF mount on it, and the company has a Nikon adapter available. Now, if you use Sony, or Olympus, or pretty much any other brand, there are tons of adapters readily available to convert to Canon. eBay is the perfect place to find them cheap.

The unit comes with a nice padded case and one slide holder, and sells for about 100 bucks, which is extremely reasonable when you realize how much money you can save on backgrounds. The company also has a pistol grip if you want your Light Blaster to be voice activated. You can check out their website here.

Enough for the review. Let’s put this thing to work and see what it does. The set up is really easy. Slide your speed light into the back of the unit, and tighten the strap. Let me stress this: tighten the strap. You don’t want your speed light falling out. Pick a lens, mount it, and then mount the entire unit on a light stand, unless you have someone to hold the pistol grip.

I started with the unit on a speed light swivel, on top of a light stand. While this works, fine-tuning the aim of the unit is a little awkward this way. Then, I mounted the unit on a tripod, which allowed me much more control and accuracy. In a conversation with Light Blaster’s creator, Udi Tirosh, he explained that he uses an inexpensive ball head. You can get a ball head adapter for under 10 bucks on Amazon. I went with one that has a quick release head and that cost me just $16, and I mount it on a light stand so that it takes up less floor space in my studio.

Lens selection is pretty basic. If you need to cover a wide area and you’re working in a tight space, a wide angle lens will be your choice. If you have plenty of room, and you don’t need a lot of coverage, a 15 millimeter will work fine. If you want to project onto a person or a small area, a telephoto will be much more efficient. I’m already bidding on some old inexpensive Canon lenses on eBay so that I can dedicate them to this piece of equipment, because I see it being a regular part of my arsenal in the future.

As I’ve mentioned in previous videos, the most versatile color background to use is a medium gray. With the Light Blaster, there are so many creative possibilities with really any color background: black, white, purple, orange, you name it. You can even project onto brick walls, or really any kind of surface, and alter its appearance.

Now, I could spend hours showing you the possibilities of the gadget, and I still won’t scratch the surface. Let me just walk you through my experimentation with it, and show you what I learned. I started out with a 15 millimeter lens on the Light Blaster, and this gobo below with the circle patterns. This is part of the Light Blaster pro gobo set. 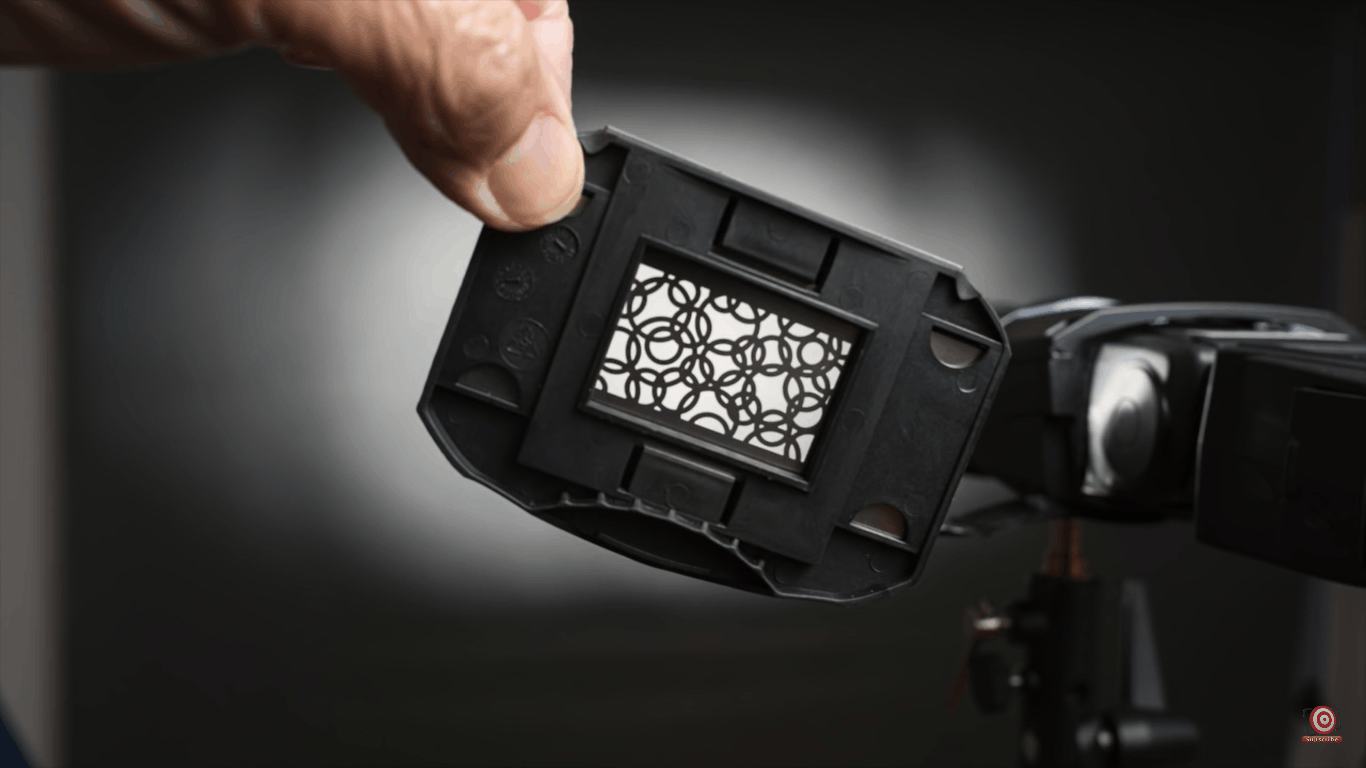 These are all metal etched, heat-resistant gobos that are extremely durable. You can see below that with the Light Blaster placed about 6 feet from the background, the 15 millimeter lens only covers a small part of the 9 foot wide background. 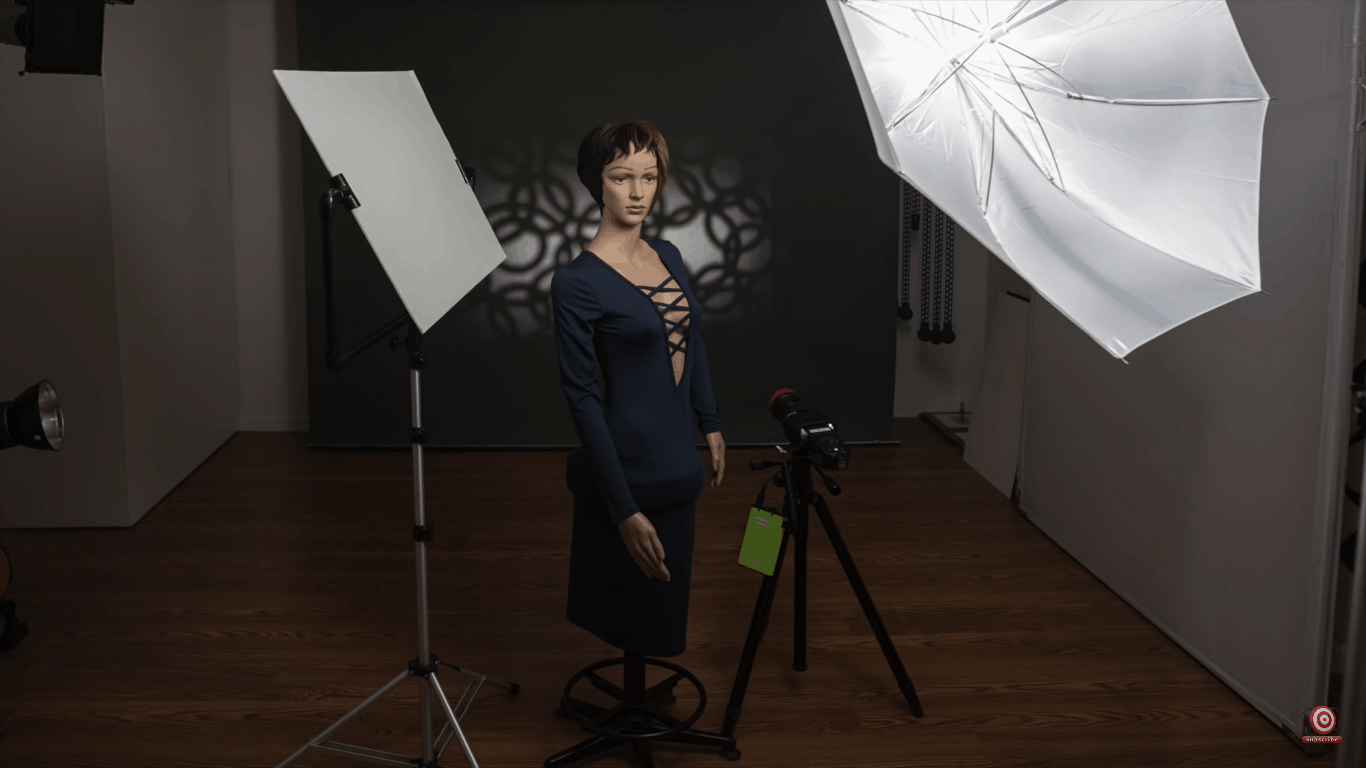 But, it’s enough to be able to shoot a nice portrait with a 100 millimeter lens on a Nikon D810. In this setup, my reflector on camera left is a Walmart reflector being held by one of the PVC reflector holders that I showed you in the this video. This is a finished one that I painted black.

If you need to cover more of the background, a wide angle lens, like for example, a 20 millimeter, will cover much more area, still from a distance of about 6 feet from the backdrop. For more options, you can place a colored gel over your lens and turn this: 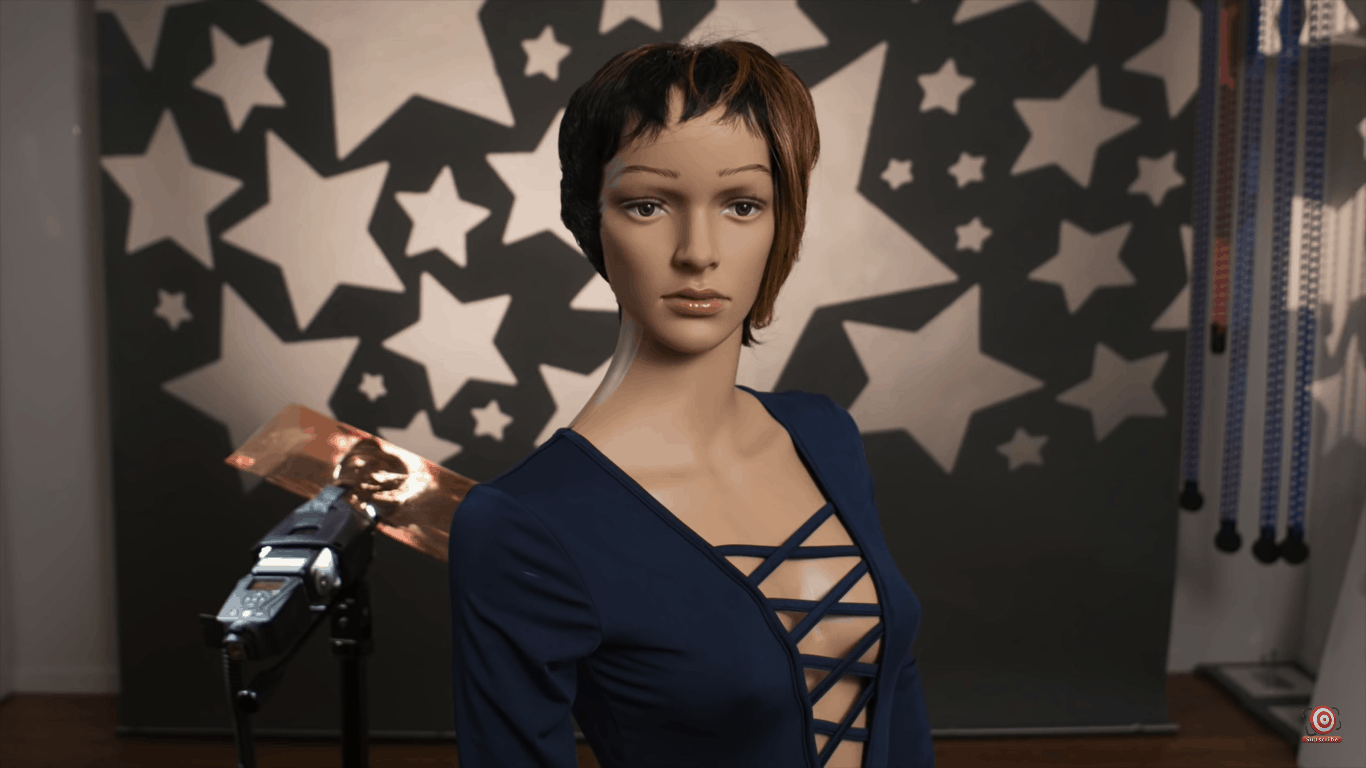 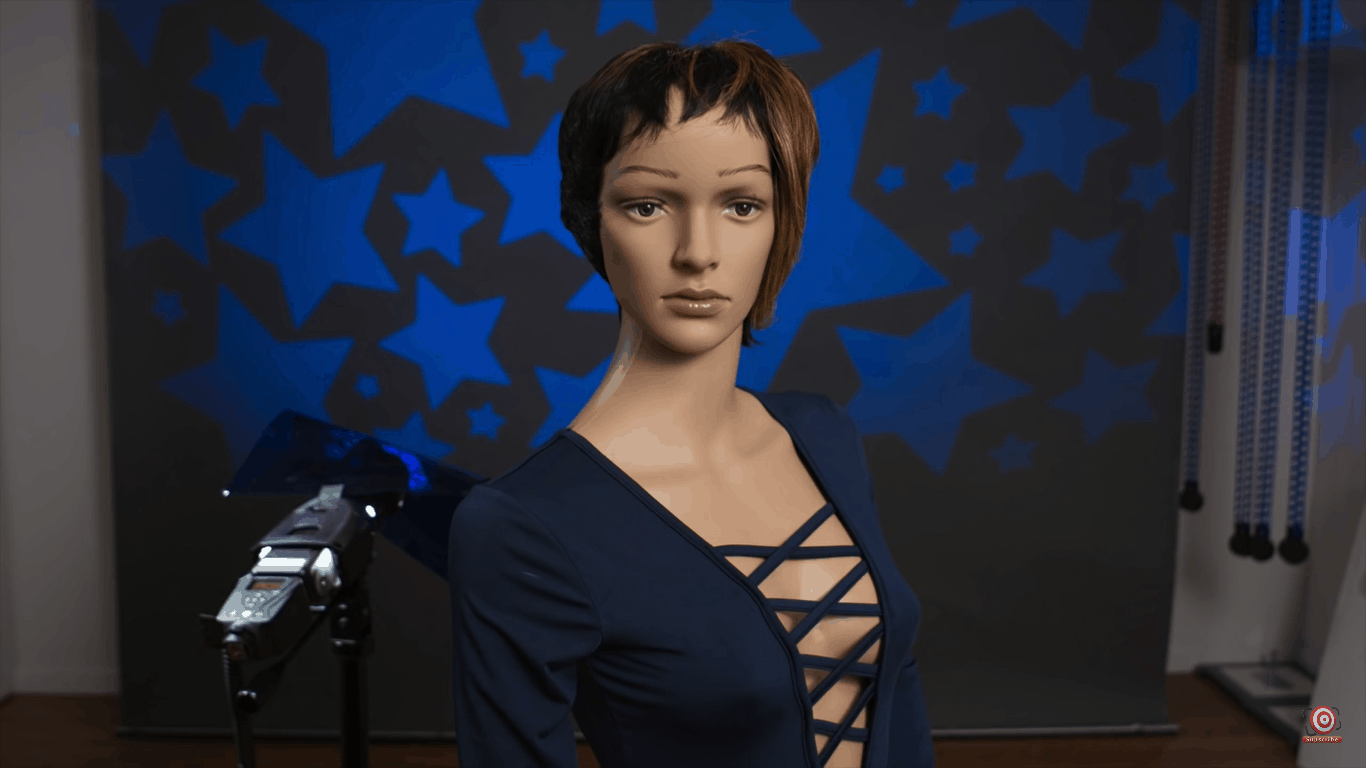 These are still on a medium gray background with a metal gobo, a 20 millimeter lens, and the gels are just taped onto the unit with some gaffers tape. Now remember, since you’re using a camera lens, focus becomes an option. You can have the projected image from the Light Blaster be in focus or out of focus. Add to that the control that you have with depth of field from the camera and the lens that you’re using to take your shot, and you’ve expanded your creative range even further yet.

Here’s an example: with the Light Blaster lens focused, this is what the gobo looks like in the finished shot at F4. 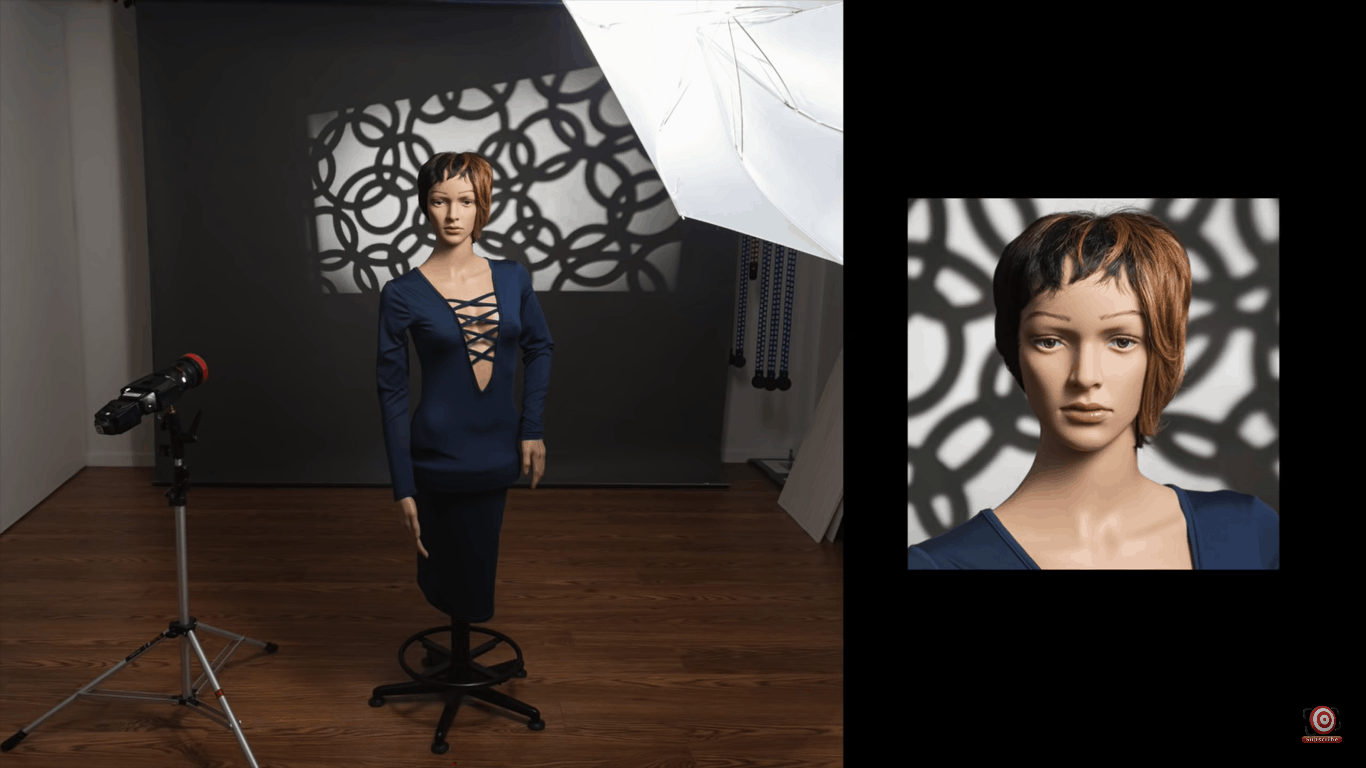 With the Light Blaster out of focus, the finished shot looks like this at F4: 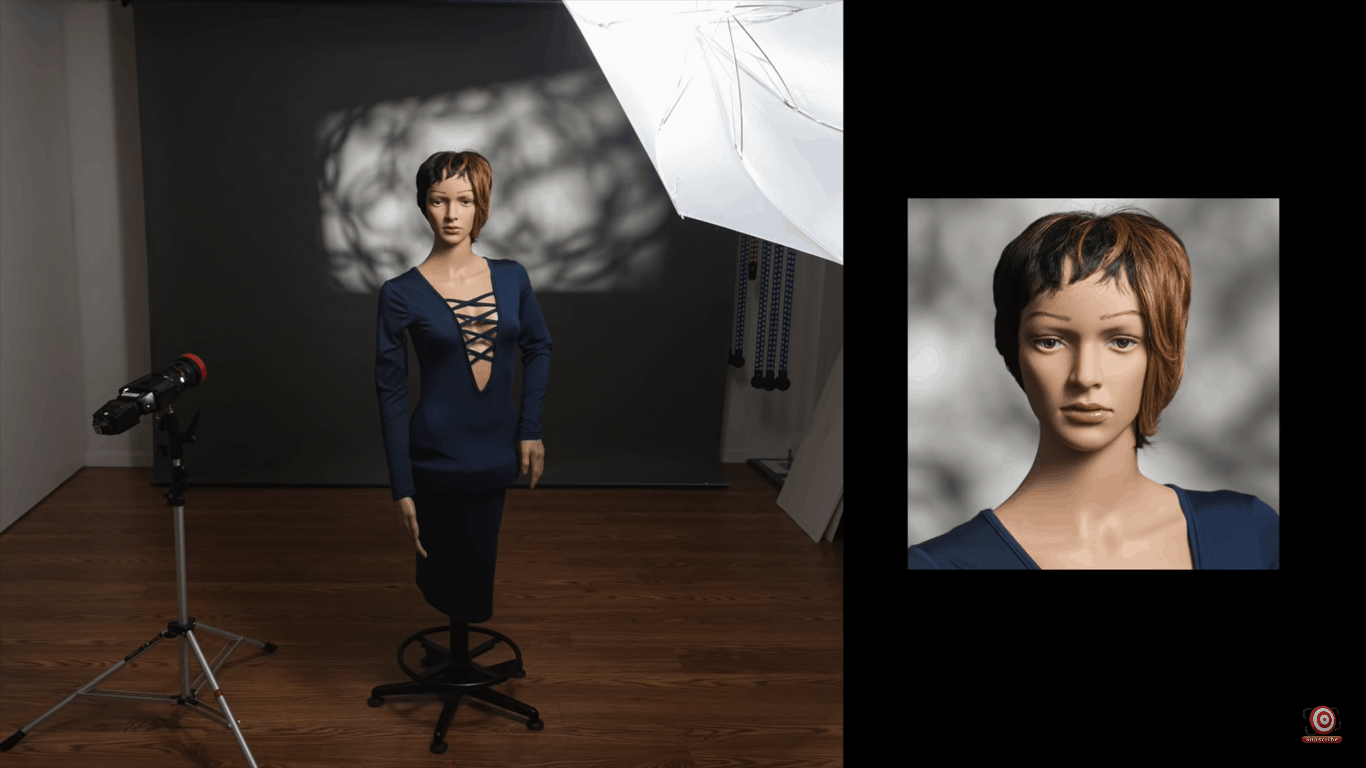 You could even use the Light Blaster as a spotlight, like below, with the 15 millimeter lens placed behind the subject. 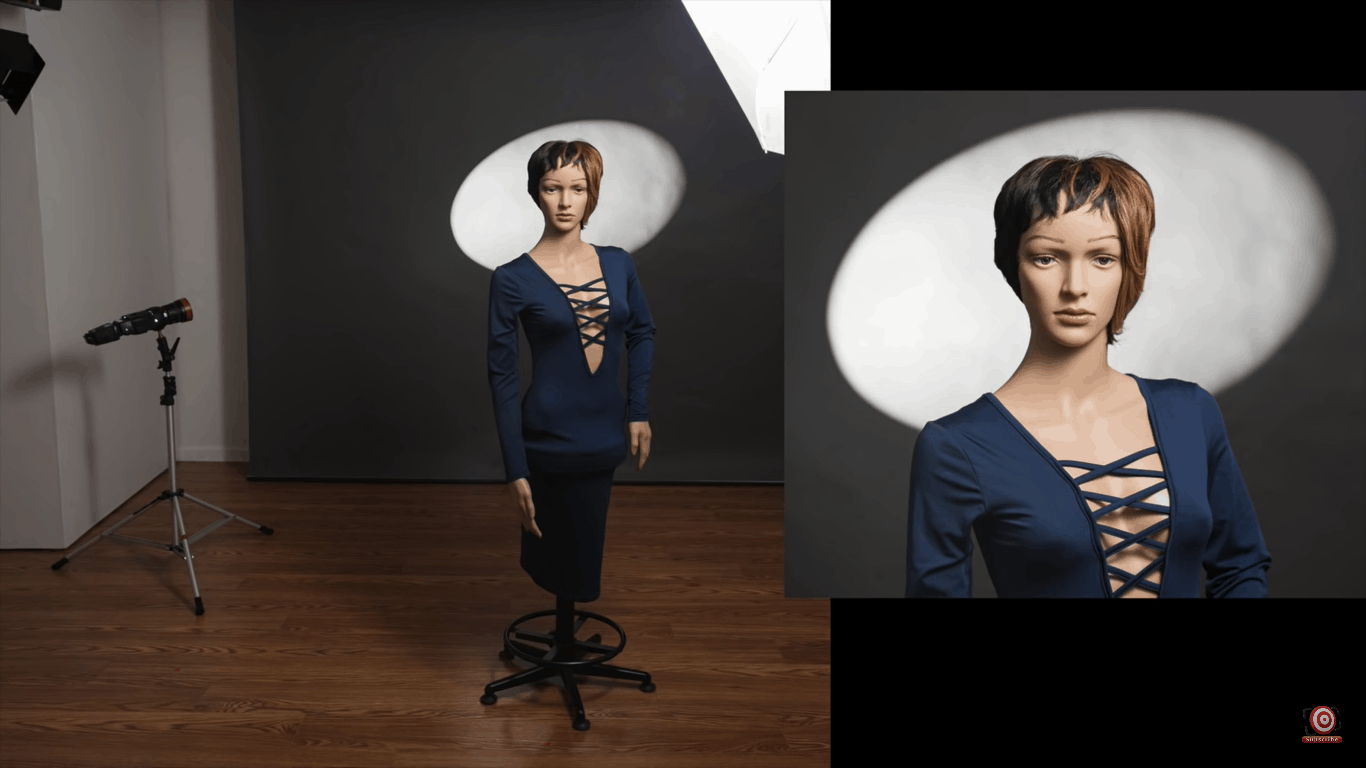 Or better yet, here with the 50 millimeter lens in front of the subject as the main light source. 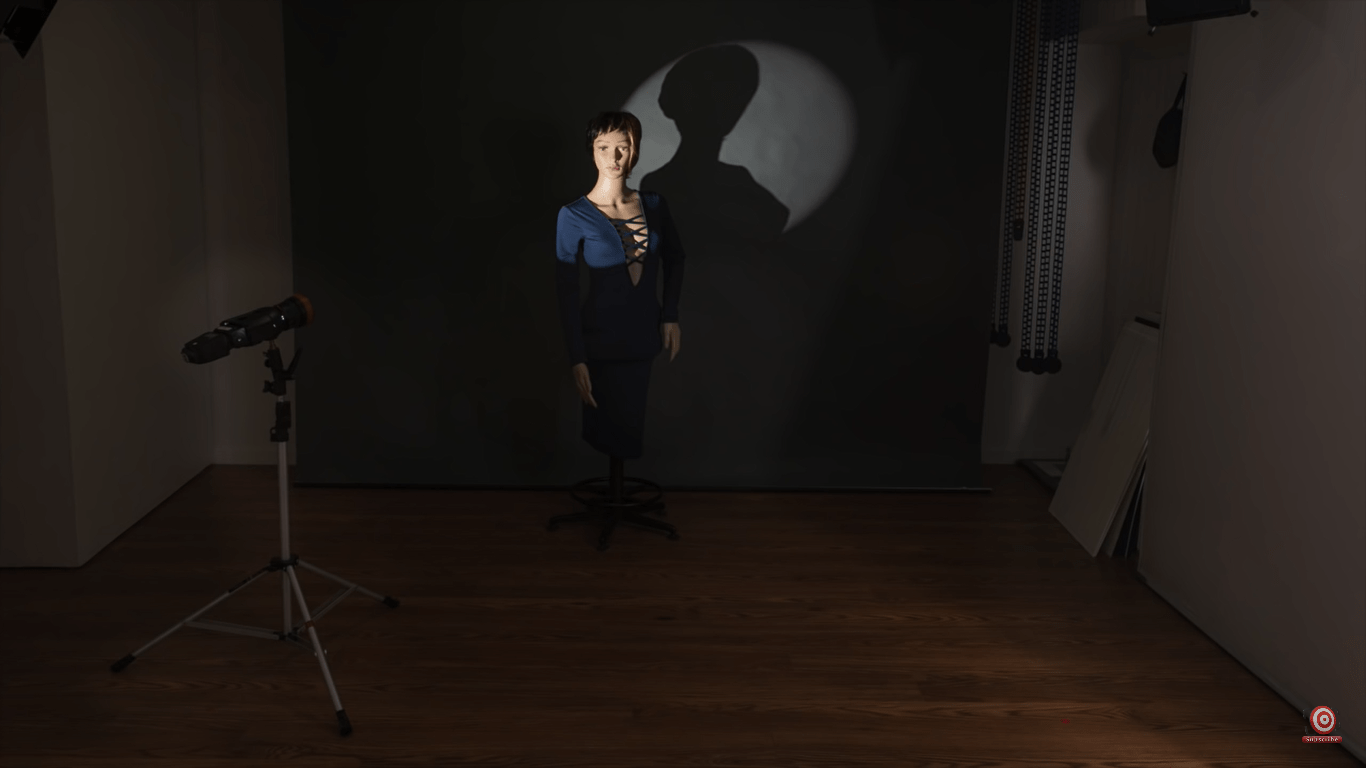 I mentioned before that you can use the Light Blaster on any color background. Here’s a simple tree gobo on the medium gray background: 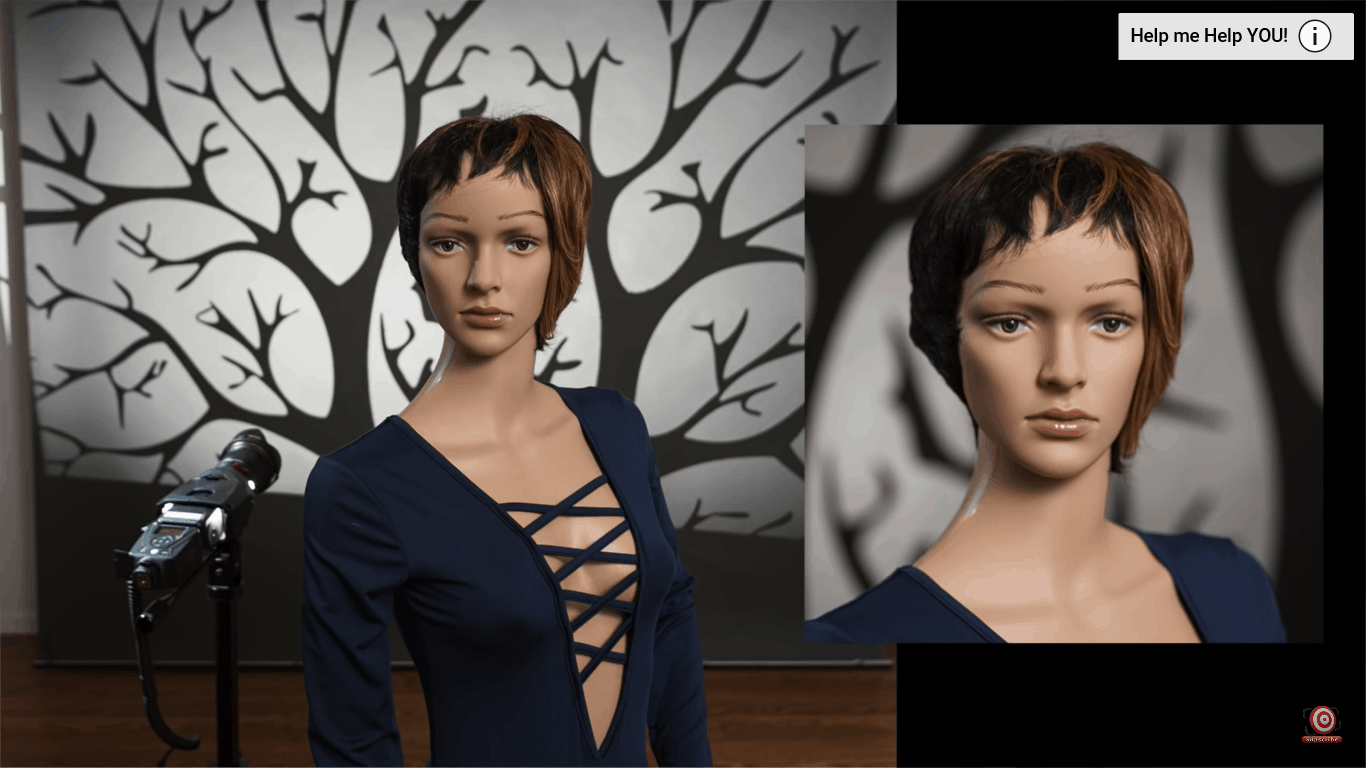 Here’s the same gobo on white: 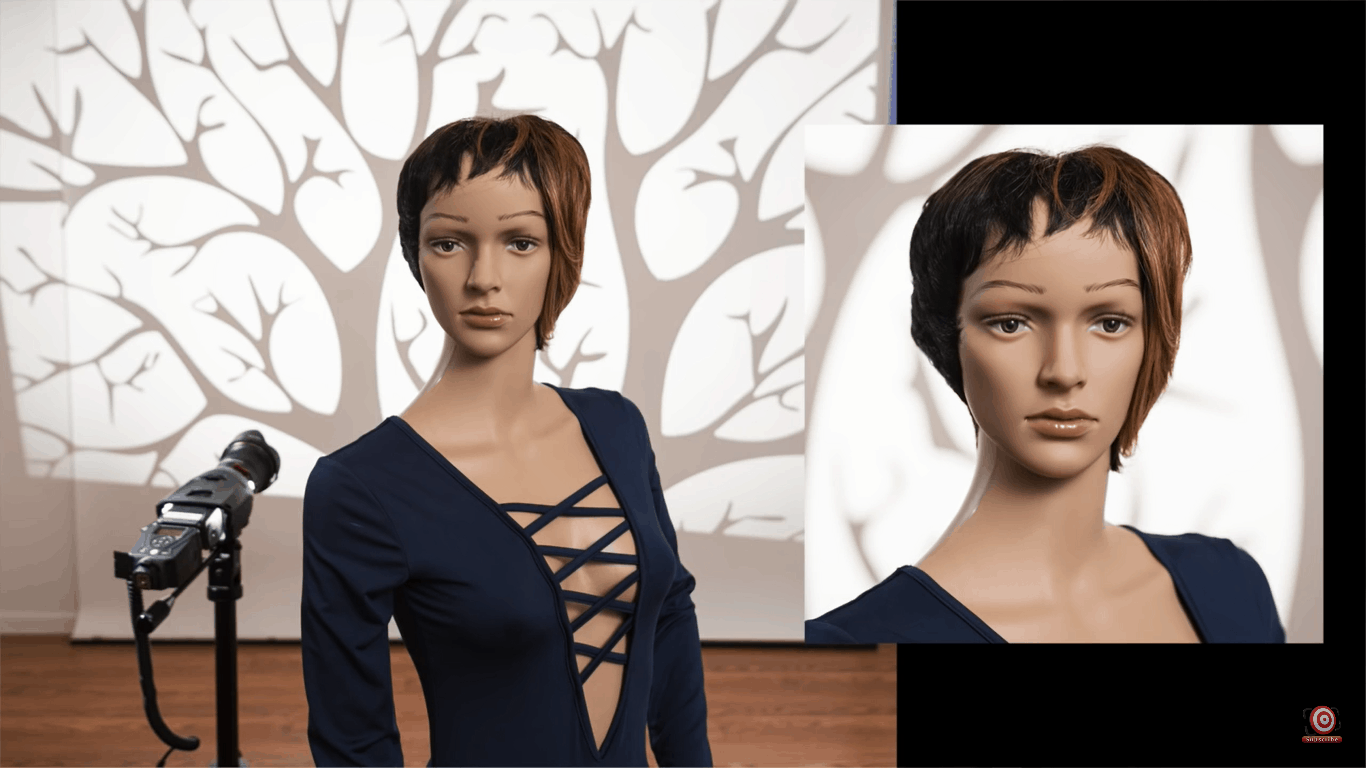 and here it is on purple: 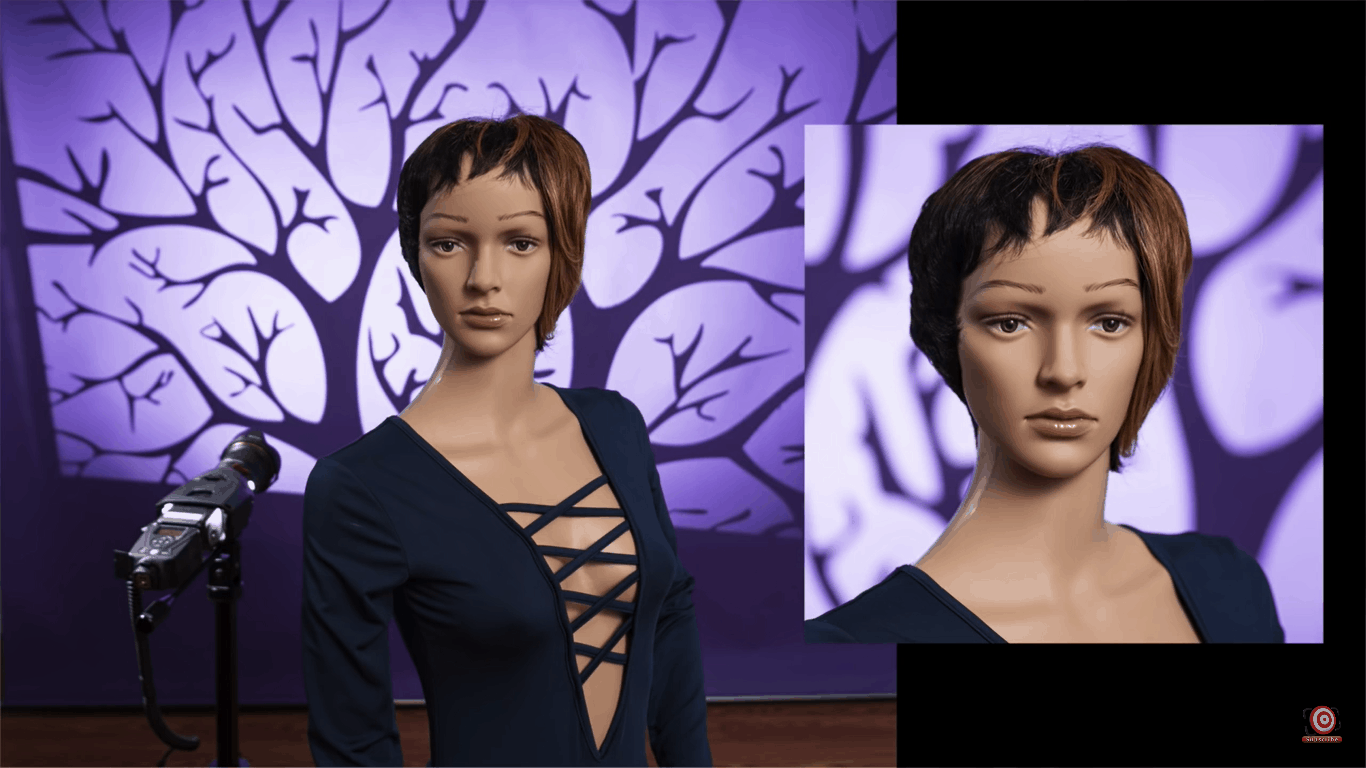 In each of those examples, if I vary the exposure and the degree of focus on the Light Blaster, the background will change yet again 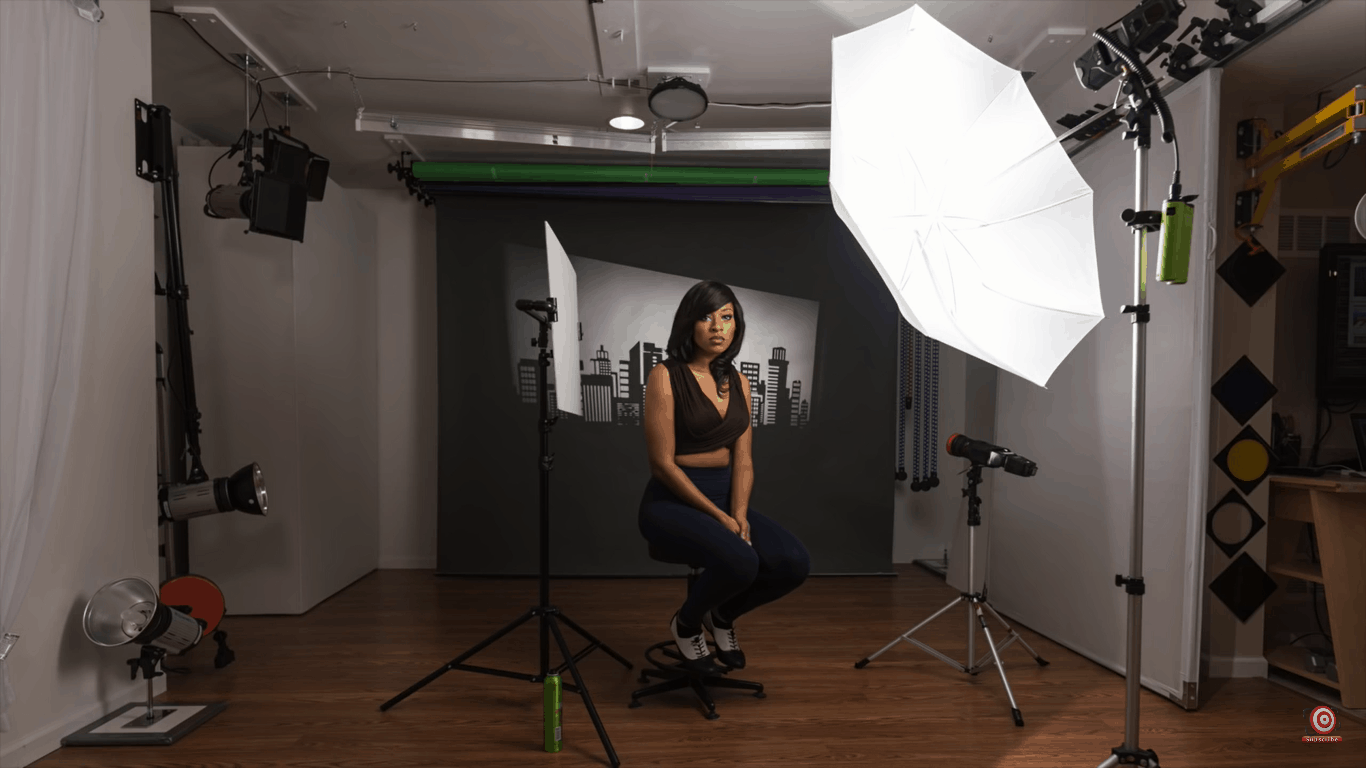 If I add a third strobe with an amber gel on camera left, I can add some rim light. By changing the positioning of the Light Blaster and the power of the LumoPro LP180, I can go from this: 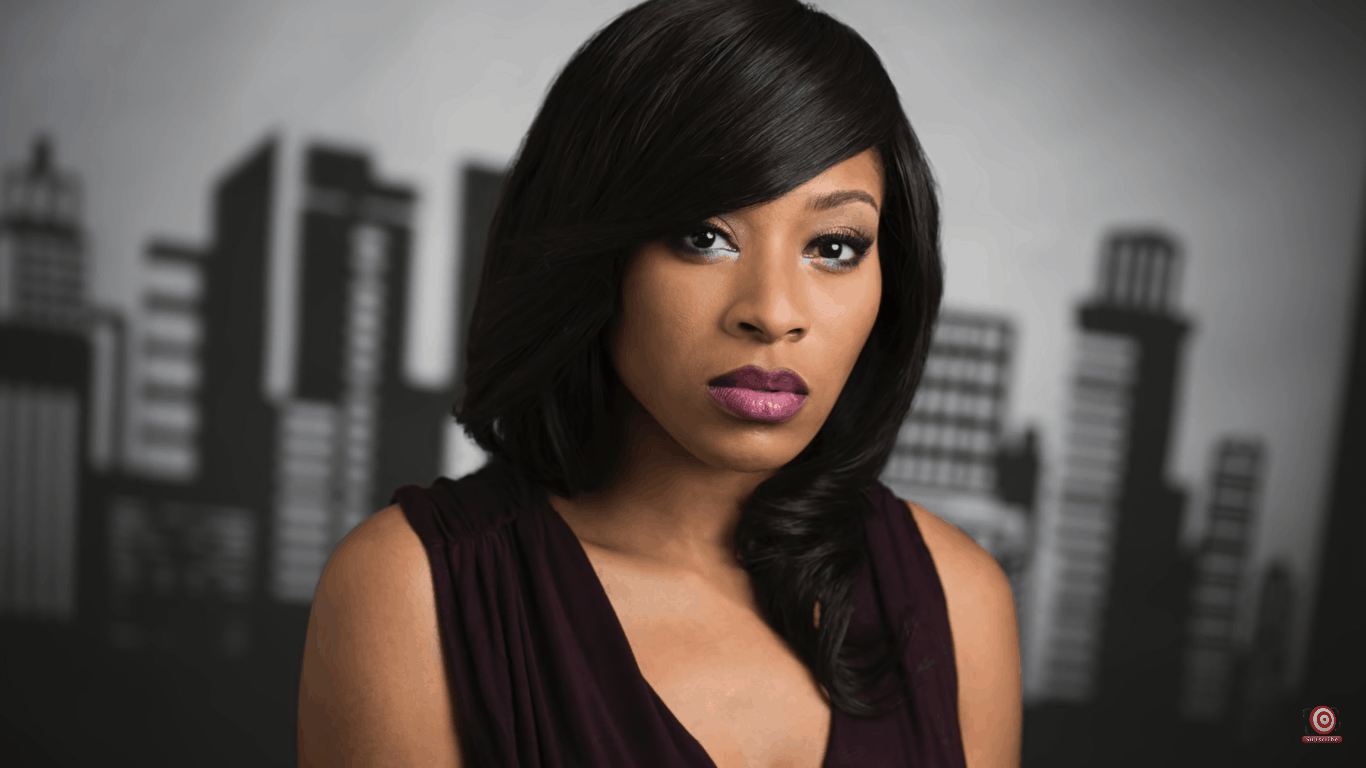 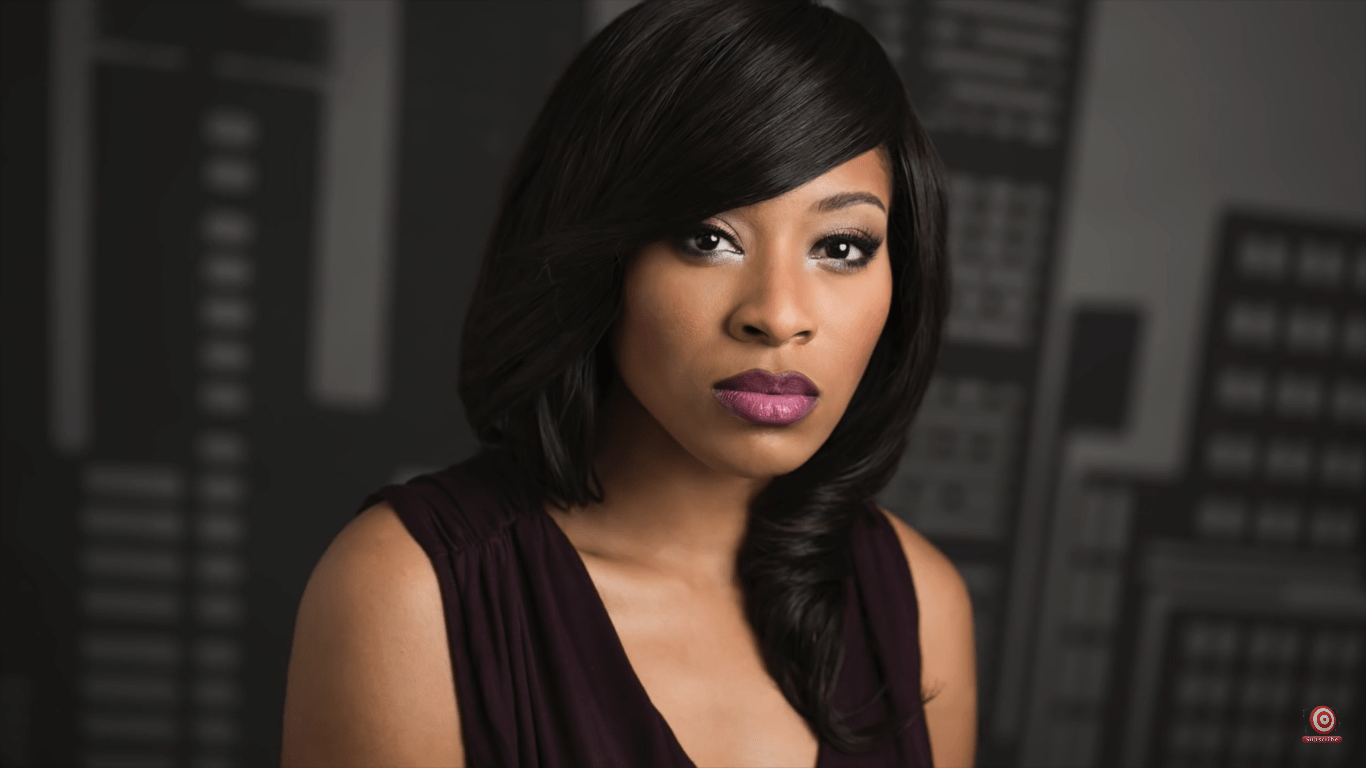 If I add a blue gel over the Light Blaster, I get this: 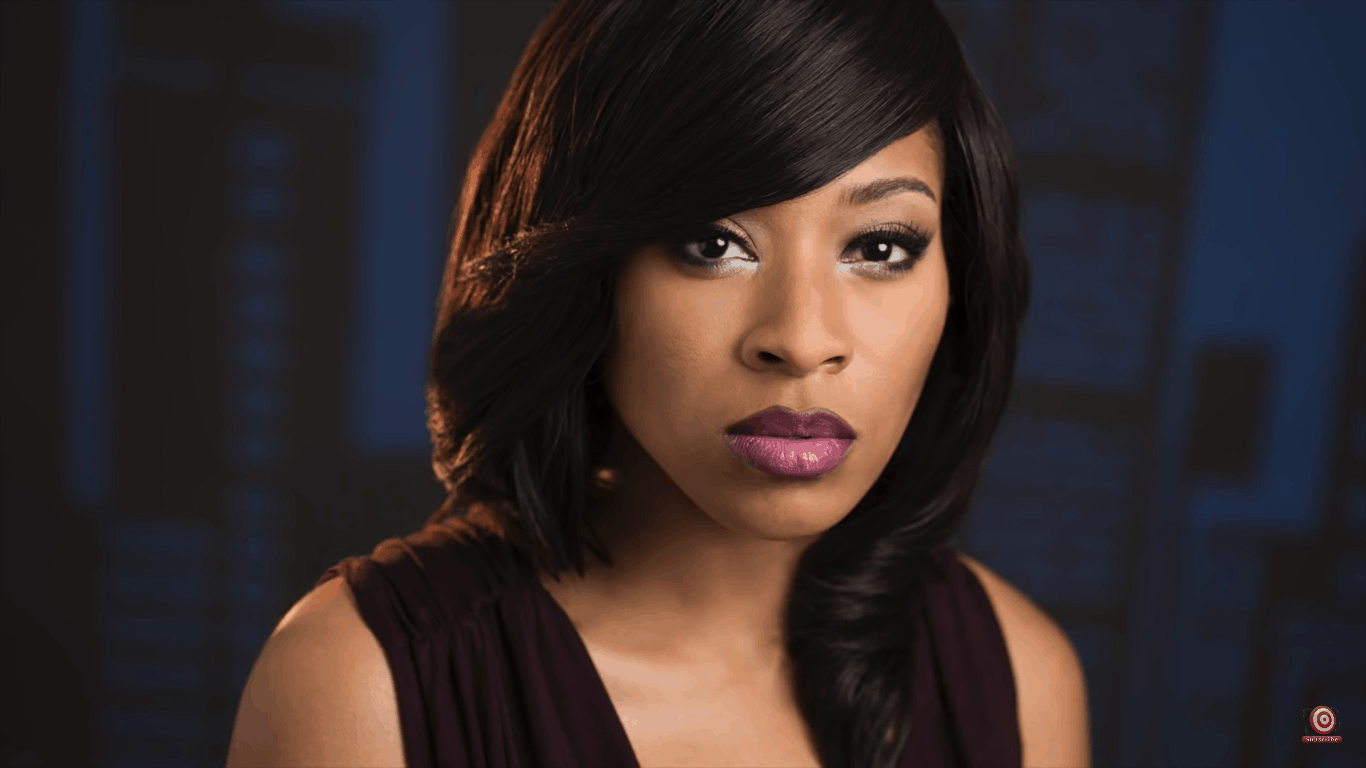 Since this was the very first time I used the Light Blaster, I didn’t have any of my own slides available. Using the same basic set-up with the Walmart reflector and a shoot-thru umbrella, and a rim light on camera left, I use a slide from the Light Blaster creative effects kit on a black background to get this: 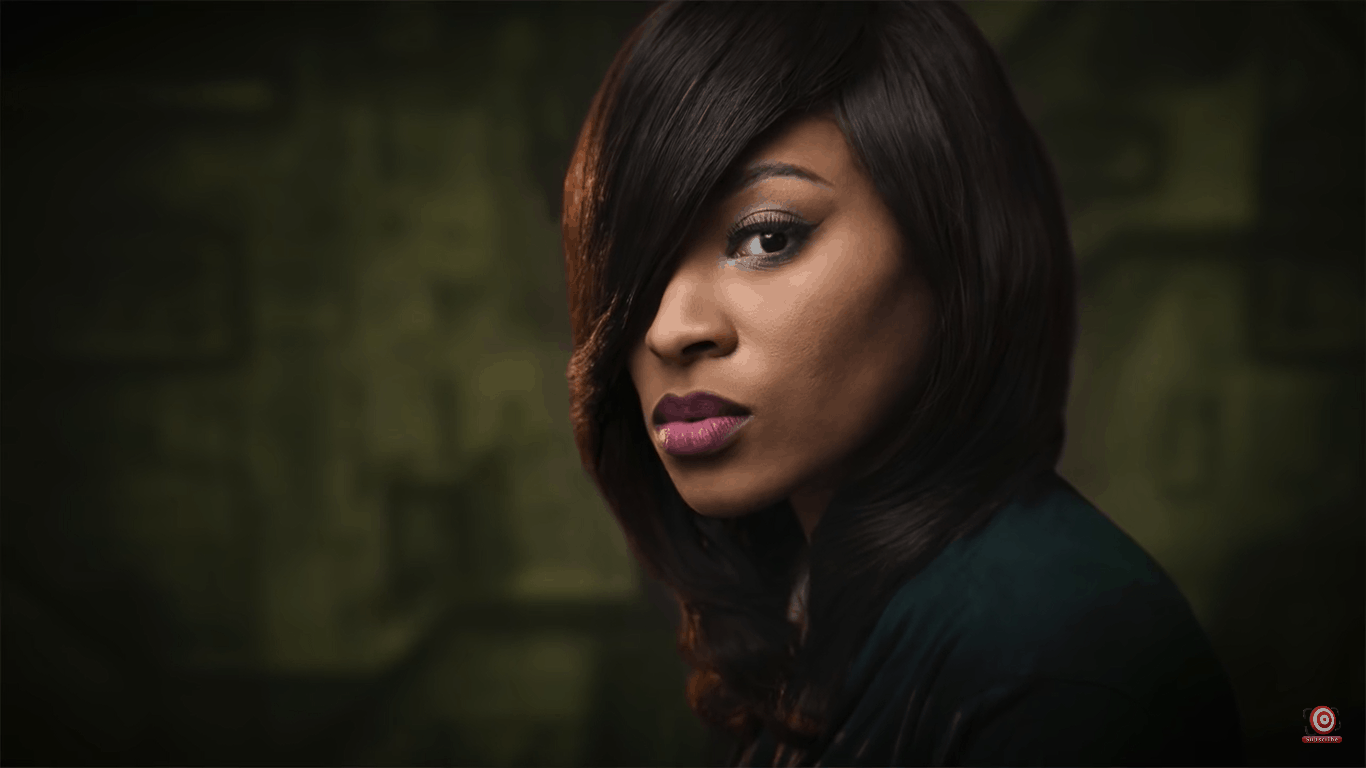 To make this a more traditional portrait, I just have to remove the hair from over her eye. If I want it to be a bit more moody, I can remove the rim and go back to the 2 strobe set-up for this: 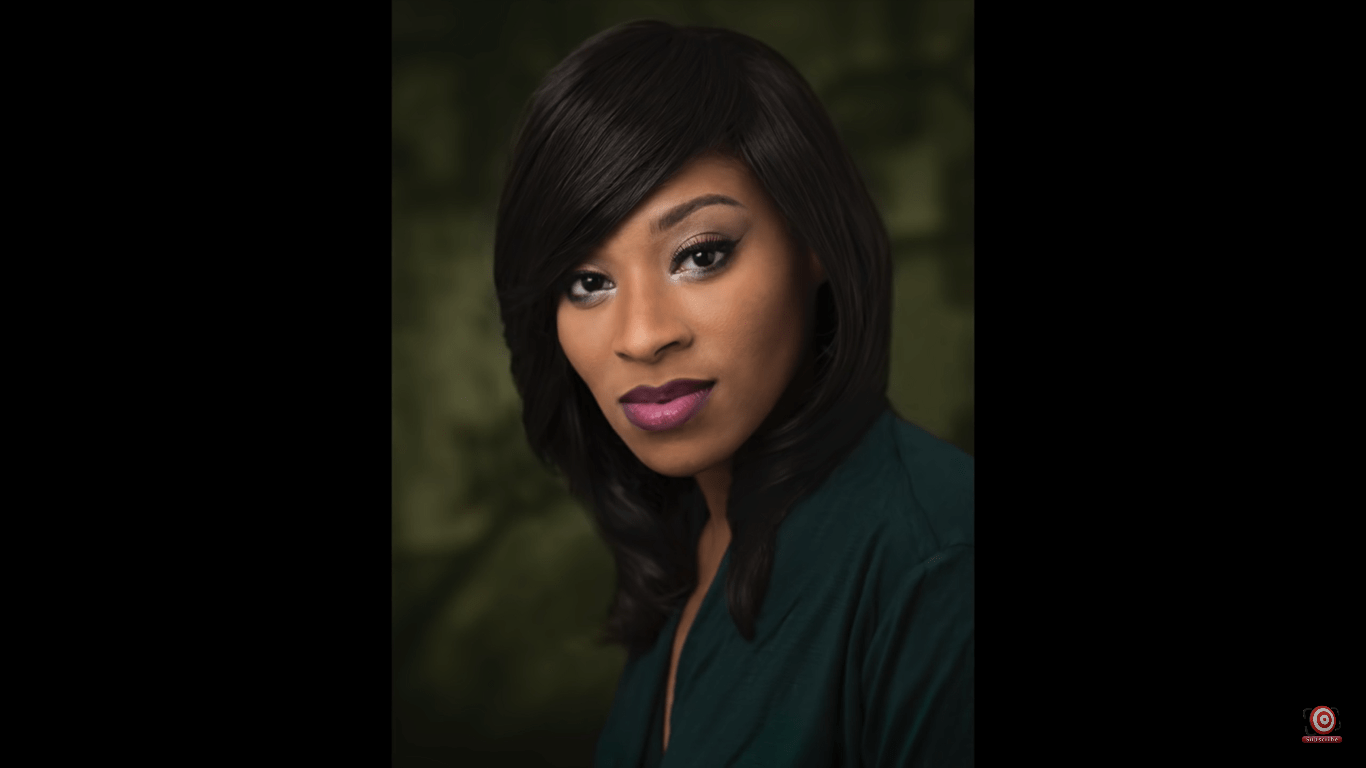 Last but not least, I pulled some 35 millimeter slides out of storage, some of which are 40 years old, but they made great background options with the Light Blaster. Or, you could have slides made from your digital files at this link here for about 2 bucks a piece. Or, you can purchase transparency film for your printer and print your own.

There you go: the Light Blaster. Hopefully this gives you some creative ideas to get you jump-started. Get out there and practice, and experiment. With a gadget like this, the sky’s the limit! And, think of all the money you’ll save by not having to buy loads of muslim and printed backdrops for your portraits.

Until next time gang – remember that your best shot is your next shot, so please – keep learning , keep thinking and keep shooting. Adios! 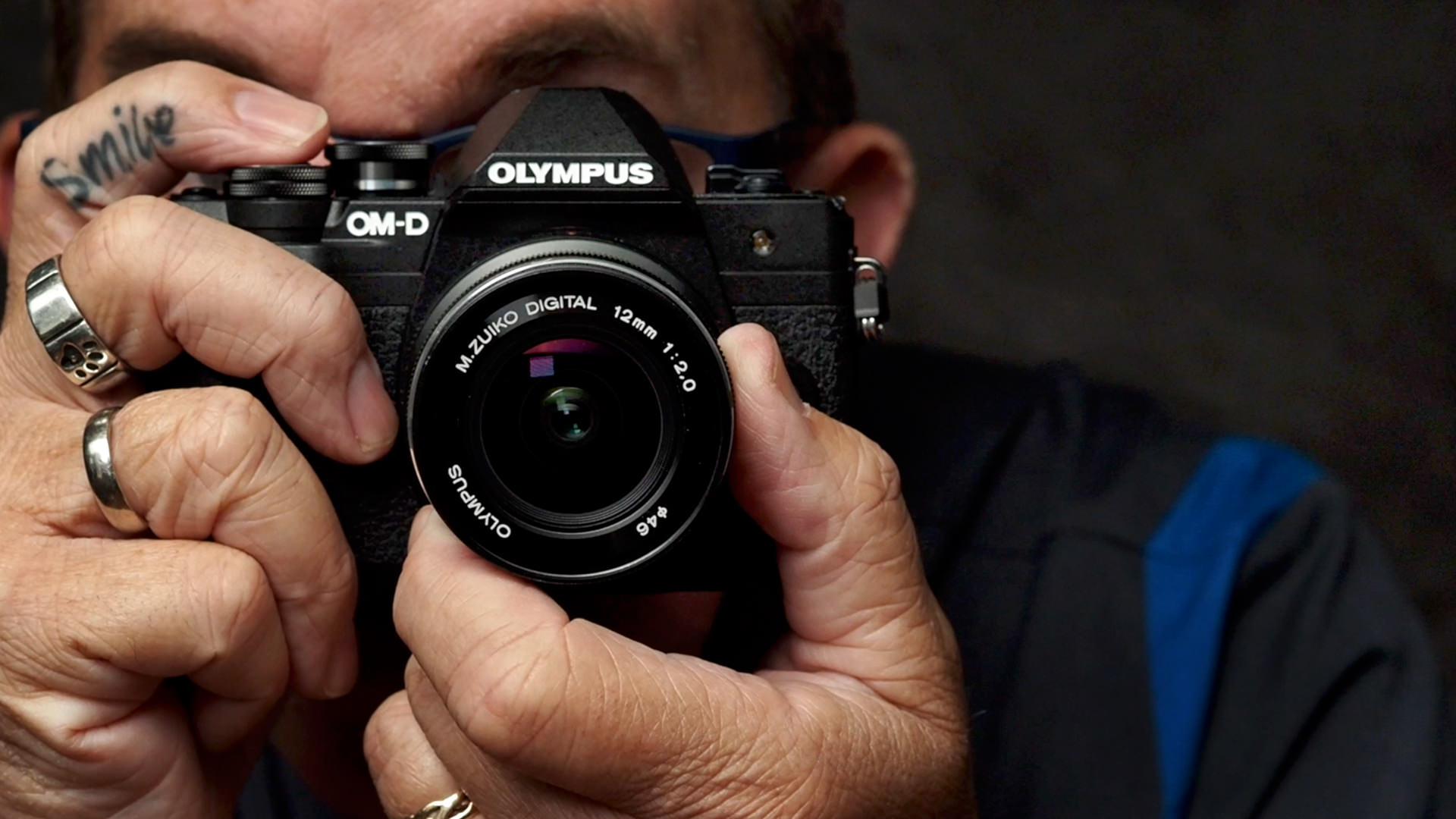 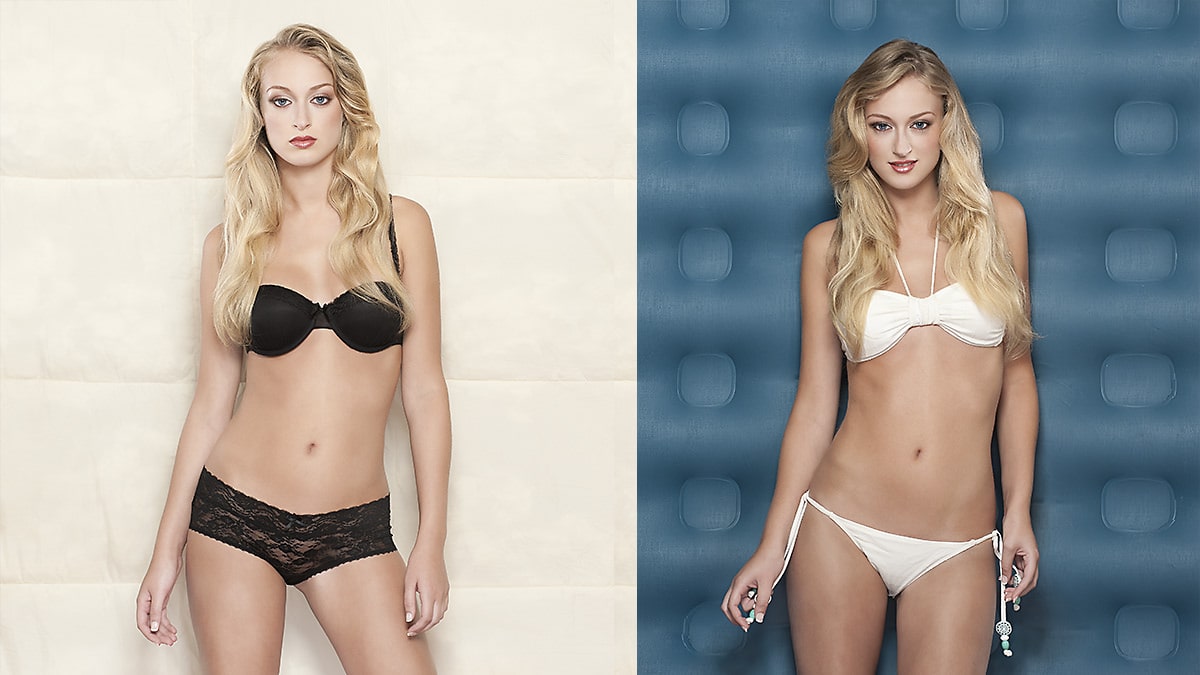 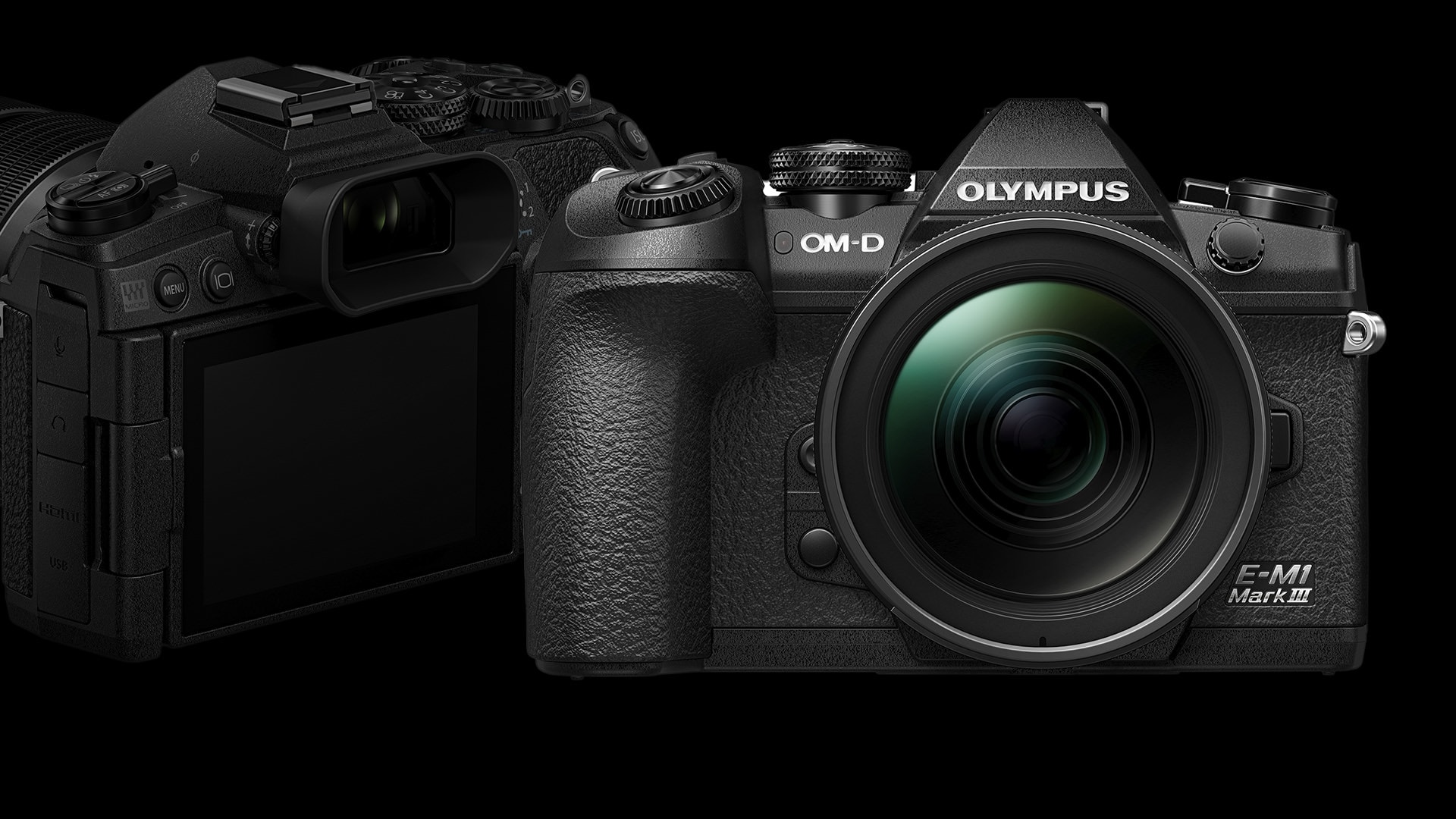 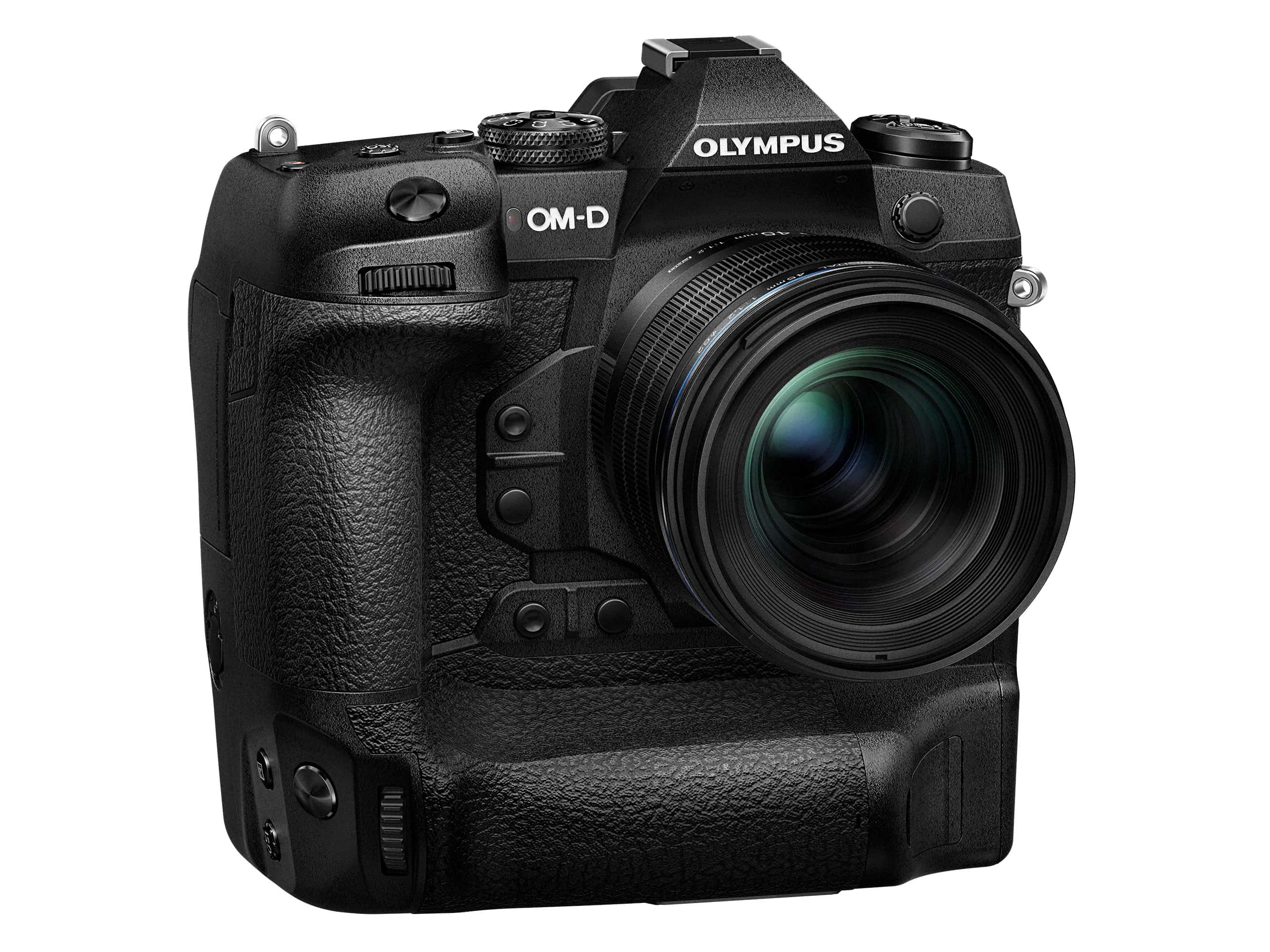 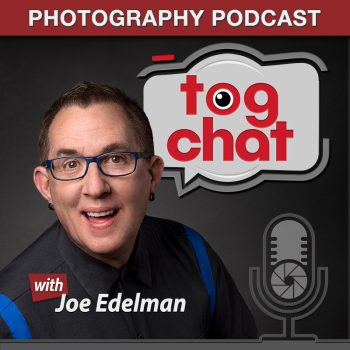