I recently did a little social experiment with two glamour headshots from a test shoot that I did with a beautiful young model. Stay tuned till the end and I’ll share the behind the scenes of how I created theses shots.

This was an experiment designed to get good engagement – in other words – lots of comments and lots of opinions. I have a very clear favorite between the two and I’ll only use one of them in my portfolio. I’ll tell you which one in a minute.

I posted both of these images in 32 different Facebook photography groups that are dedicated to topics like portraiture, fashion, mirrorless cameras, micro 4/3 format and Olympus. I also posted them to my Facebook business page, my personal page and in my own TOGCHAT™ LIVE Facebook group. 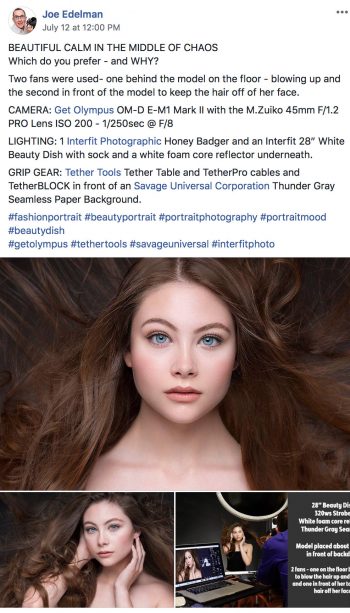 Along with the images I shared this behind the scenes shot to add some value by teaching people how I did the shots – and I asked this simple question…
Which do you prefer – and WHY?

I got a great response – over 1,100 comments were posted. There were about 15 comments that didn’t make a selection but made it a point to tell me how much they hated the photographs. There were another seventy or so comments where people didn’t express their preference but told me things like if I took the hair from one shot and put it in the other – then they would like the photo. The remaining comments split just about 50/50.

The people who like the first shot commented consistently that they loved the model looking directly into the camera and the almost startled expression. Many people mentioned liking symmetry in a photograph. This group often complained about the second shot saying that the messy hair on the model’s arm was too distracting. One person explained that the messy hair made him want to itch! Overwhelmingly people complimented the beautiful model.

The other half who picked the second shot loved the leading lines and the model’s expression. This group frequently complained that the model looked stiff and lifeless in the first photo. and the list goes on.

So, the result: the post was very successful at engagement and even some new followers. But as far as learning anything about my photography – what did it teach me? Nothing. It was basically a 50/50 split with comments that made it clear that different people have different tastes and opinions and there is no way to satisfy everyone. Kind of like politics.

And there lies the problem with opinions… The people who gave me their opinion didn’t have the same experience with the subject as I did, and they don’t have the same emotional attachment to the shot as I do. Think about it – did you pick up a camera for the first time because you wanted to impress someone? Or because you wanted to create and record the moments of your life? It probably had nothing to do with finding success as a photographer.

Science has taught us that knowing the opinions of others will impact our decision-making process and often times not for the better. Opinions hold great influence especially when they come from someone who we respect. Unfortunately, opinions usually lack context – an understanding of the circumstances and choices and opinions rarely offer solutions – they are just a shallow snap judgement.

History has also shown us that the most creative among us are the ones that are brave enough to ignore opinions and the judgement of others and follow their own inspiration – wherever it may lead them.

GREAT Photography is not about being right or wrong.

My favorite shot BTW – #1. I’m proud of both shots – but the first one is what I had in my mind when I set up the fans and I love the eyes staring right back down the barrel of my lens – and yes – I am a big fan of symmetry. 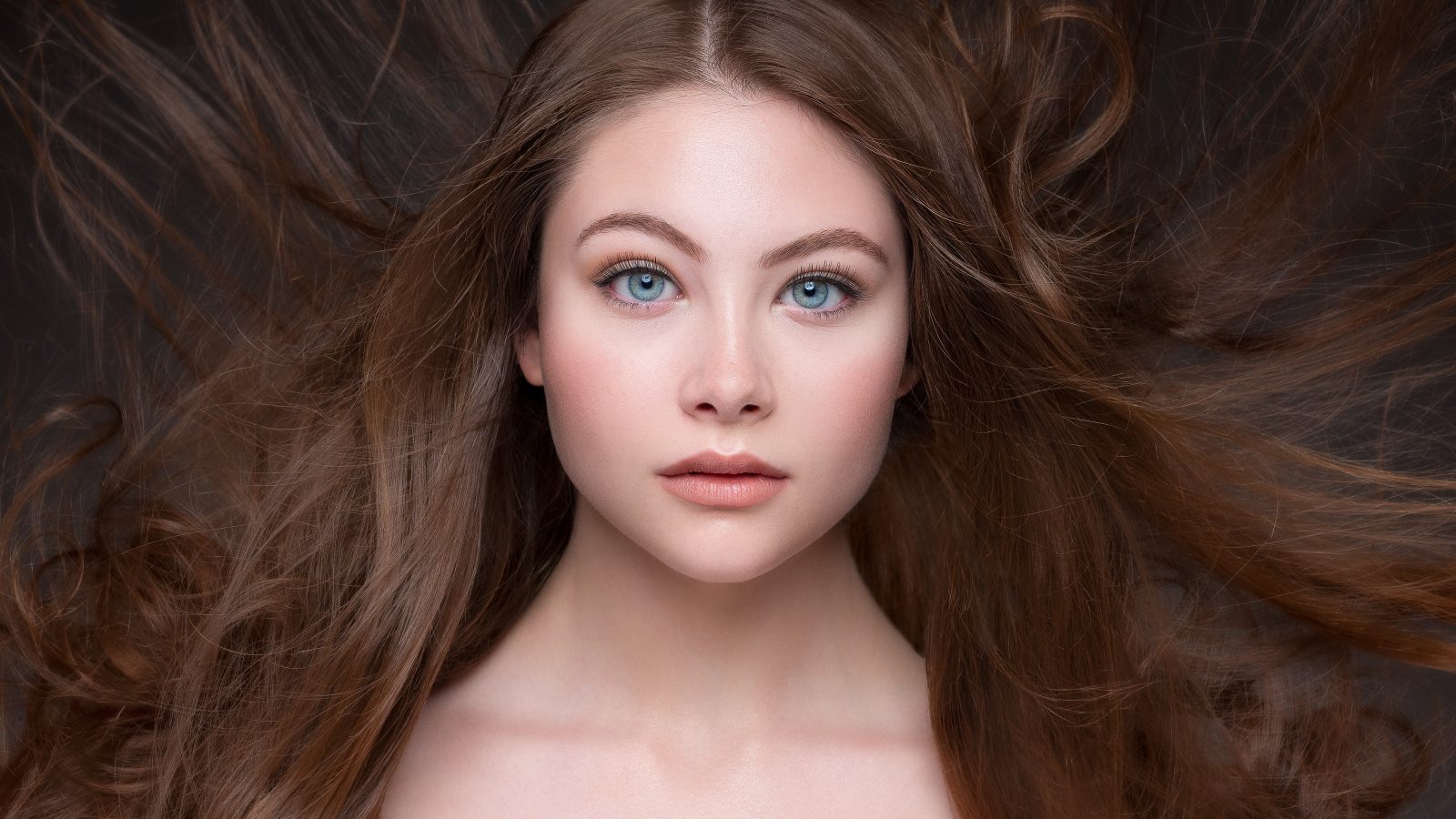 I did a similar social media post with these two photos. People overwhelmingly picked this first shot and just like the other photos offered plenty of ways that I should have done them differently. My favorite… The second shot. I love the chaos of the red balls and the calmness of the model in the center. Even though people overwhelmingly picked the first one – this is the shot that I will use.

The moral to finding success as a photographer

Don’t ask for opinions and learn to take them with a grain of salt. If you want to have success as a photographer, you have to learn to live and die by your decisions and you have to learn that NO other person will have the same experience with your photographs as YOU do – and that is ok. BTW – success as a photographer simply means achieving your goals. Those goals may be just having the ability to produce great family photos, or they could involve being able to pay your bills with a camera and work as a full-time photographer. The bottom line – it’s about doing what makes YOU happy. Photography that YOU are passionate about in the way that you like to view it.

If you are thinking about turning pro and want to build a following or get more customers – you have to shoot what you shoot – the way you like to shoot it and do it to the best of your ability and then find the people who like what you do and who are willing to pay for it. Not everyone will. I promise you there are a lot of people who think my photography sucks. And that’s ok! 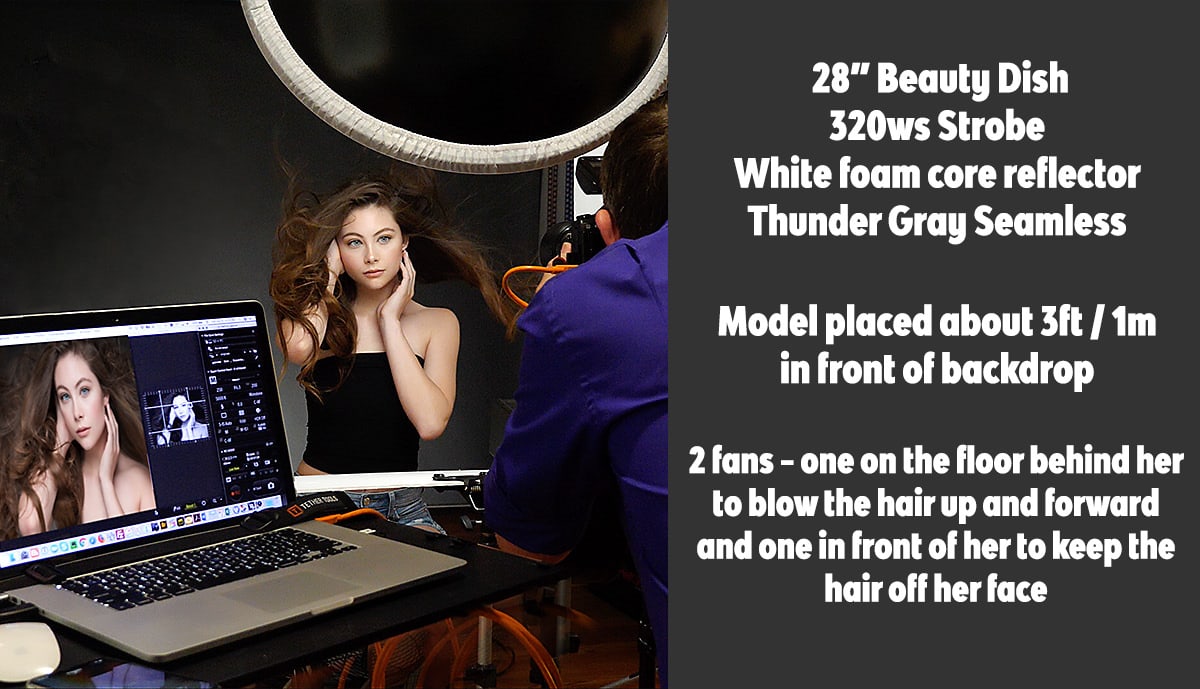 Both of these shots are simple one light portraits. I have my model placed about 3 feet in front of a Savage Universal Thunder Gray Seamless paper backdrop and I am using one Interfit Honey Badger with a 28” Studio Essentials Beauty Dish with the sock in place. In case you are wondering – a sock is a cloth diffuser with elastic sewn in the edges that you can stretch over the face of a beauty dish to soften the light. I have a white foam core reflector underneath the model for a bit of fill and to add to the catchlights in her eyes.

The vertical white reflectors that you can see in the background – are really not impacting this photo at all. They were left over from a previous shot I did, and I just moved them out of the way to do the blowing hair.

One fan is placed on the floor behind my subject and it’s aimed straight up which blows her hair up and forward. The second fan is in front of the model to help blow the hair of off of her face.

I always have my makeup artist or an assistant alongside the model to help manage the hair while I’m shooting.

Here is a third version that I also liked – but not as much as the first two. 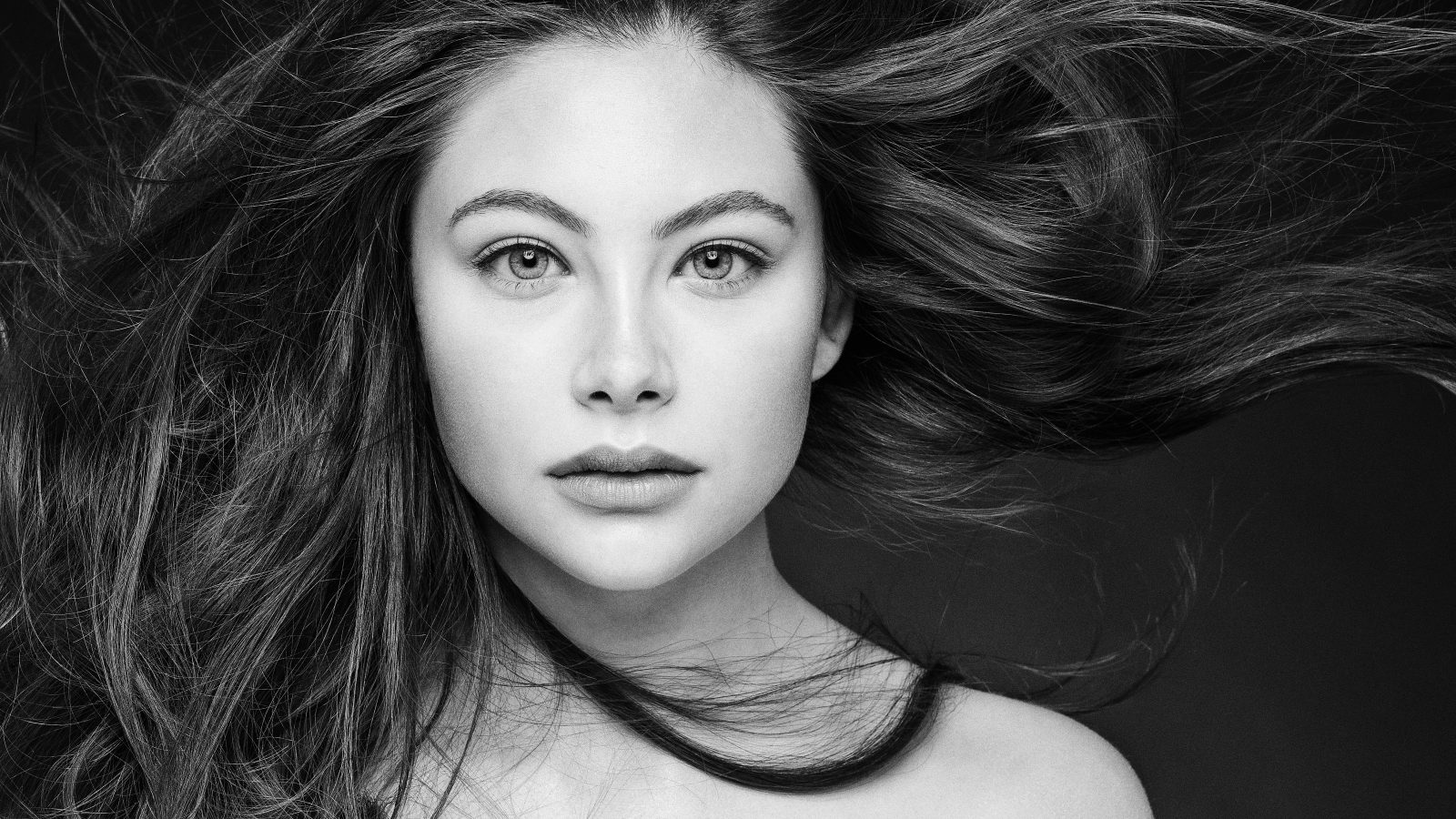 I hope this makes you think and more importantly empowers you go and have FUN and enjoy your cameras and pursuit of good images – so please – go create and show me what you come up with. 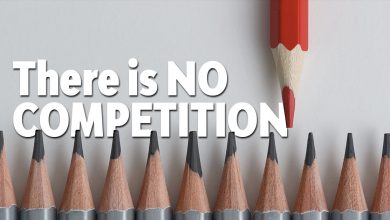 80% Of Portrait Photography Is Psychology 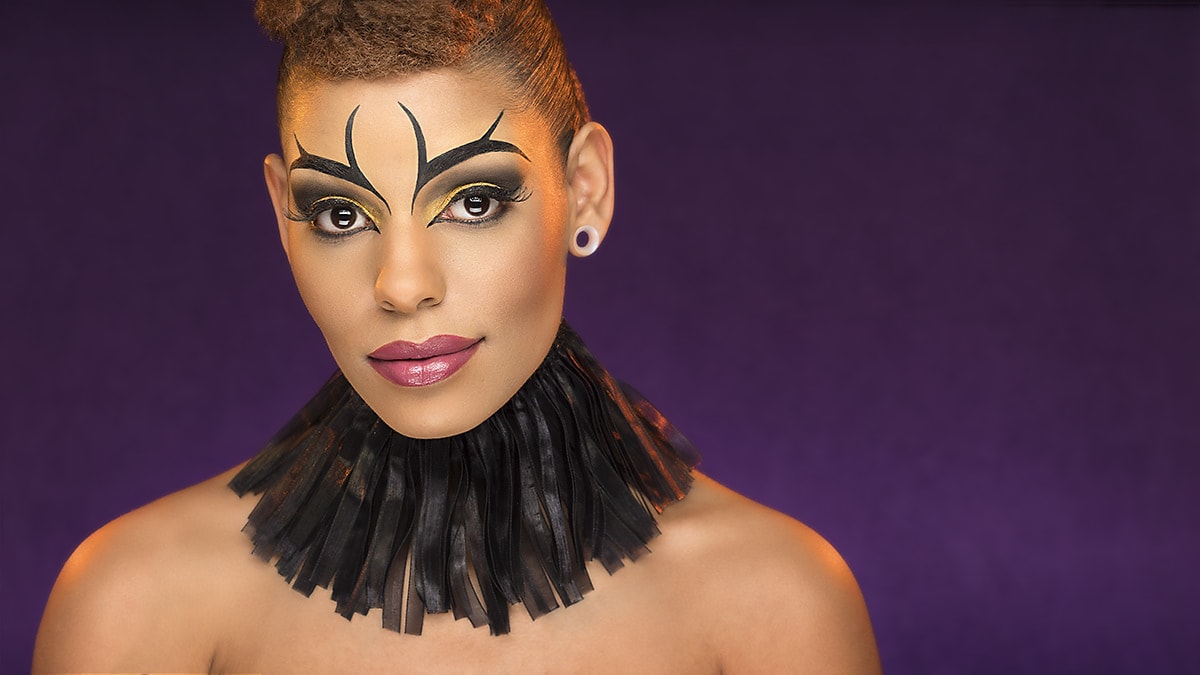 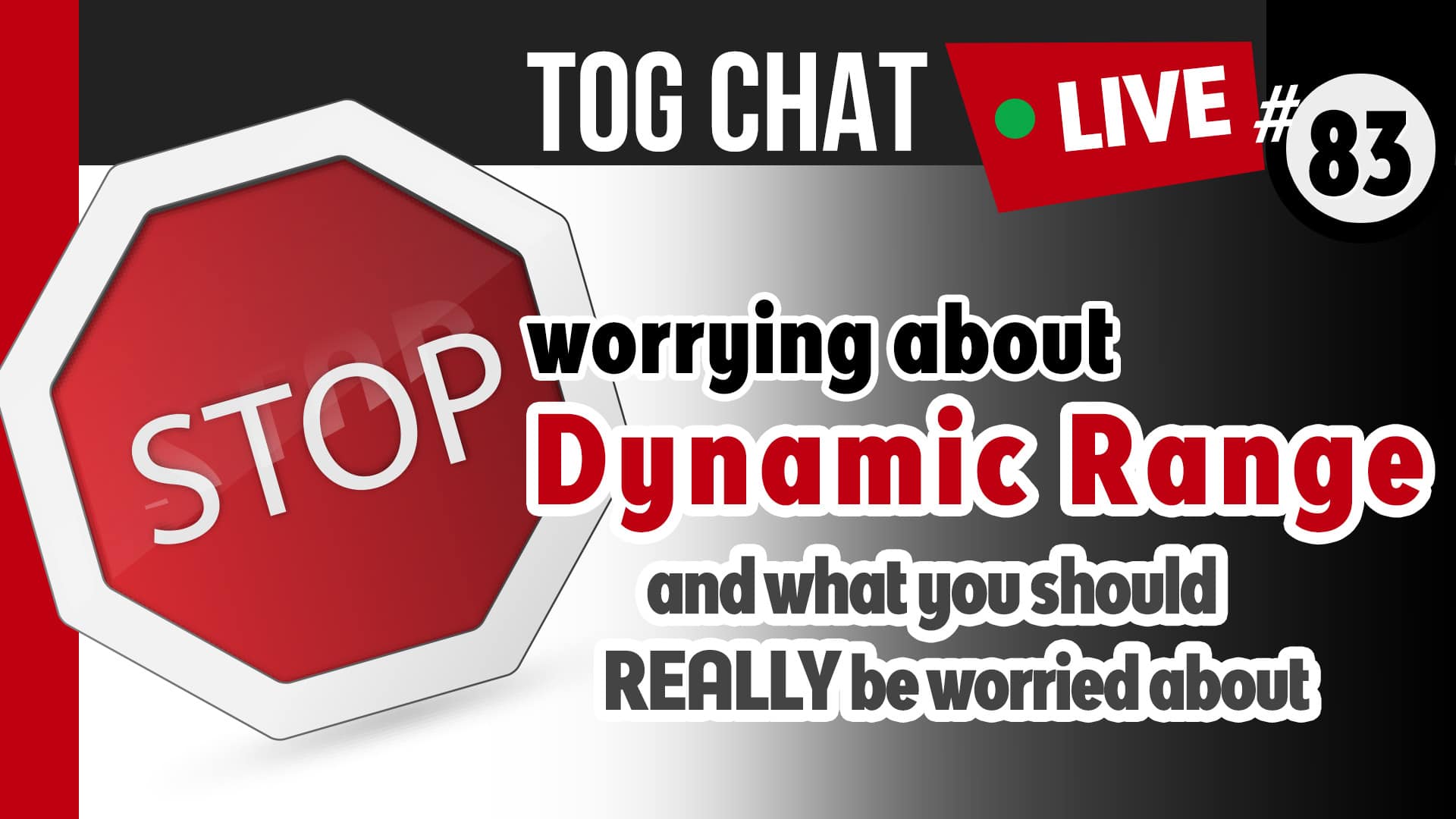 What is Dynamic Range? 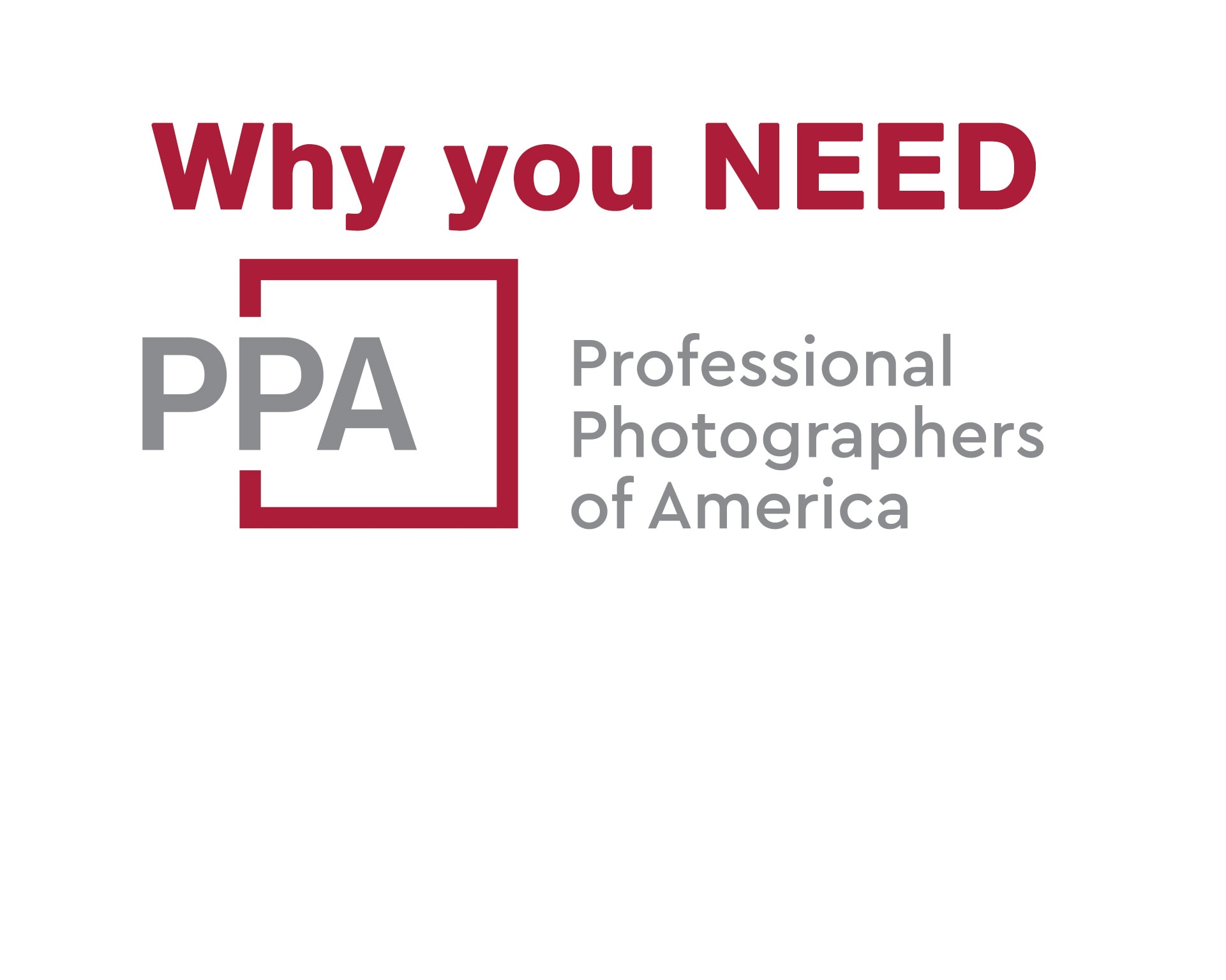 Why You Need To Join Professional Photographers of America (PPA)